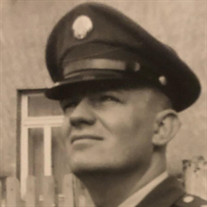 Alfred V. Thornton born in Calumet, Michigan on October 18th, 1938 passed away suddenly on November 26th, 2020. He was a resident of Warren, MI, while spending his summers in Calumet, MI since his retirement. He is survived by: his loving wife Eytoile of 60 years, his son Al (Karen) Thornton, his daughter Eytoile (Kurt) Phillips, his grandchildren Laura (Dylan) Schneider, Melissa (Paul) DeSimone, Brian (Jessica) McDougall, Eytoile Dancy, Troy McDougall, Sarah Thornton, William Thornton, Destiny Phillips, Amber Phillips, Cassidy Phillips, his Great Grandchildren Collin Dancy, Gabriel Thornton, Nicole and Christopher Mcdougall, Annabelle DeSimone, Mirabel and Desmond Schneider, Siblings Ruth Carillo, William Thornton, Esther Kelly, Gene (Sue) Thornton. He is also survived by many nieces and nephews that he loved. He was predeceased by his parents William and Grace[Andrews} Thornton, brother Glenn Thornton and sister Grace(Ed) Wetalainen. He loved spending time in the Copper Country, always considered it his home. He enjoyed taking car rides with his wife. He enjoyed sports especially the Detroit Red Wings. He coached youth hockey for several seasons, which he enjoyed because of his love of the game, the kids, the families, those he coached with, many of whom he maintained life long friendships . He was a veteran and a member of the American Legion Post 90 Lake Linden, MI. He will be missed by so many, but his jokes and the love he gave everyone will carry on. He will be buried in Lakeview Cemetery Calumet, MI in the spring. A memorial service will be scheduled at a later date this coming summer. Arrangements for Mr. Thornton were entrusted with Mandzuik Funeral Homes, Sterling Heights, MI. Condolences and memories and photos can be shared on their website.

Alfred V. Thornton born in Calumet, Michigan on October 18th, 1938 passed away suddenly on November 26th, 2020. He was a resident of Warren, MI, while spending his summers in Calumet, MI since his retirement. He is survived by: his loving... View Obituary & Service Information

The family of Alfred V. Thornton created this Life Tributes page to make it easy to share your memories.

Send flowers to the Thornton family.