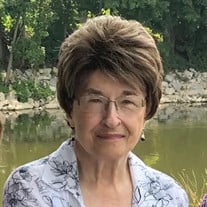 Beloved wife of the late Jack; loving mother of David (Bridget), Susan (Linas) Velavicius, Gerald (Kathleen) and Linda (Gerard) Vecore; dearest grandmother of Benjamin, Jackson, Alan, Kevin (Vicky), Matthew, Andrew, Samantha and Bryan; dear great grandmother of Jack and soon to be Peter; sister of the late Mildred Leach. Anita Pitlock was born in Detroit, Michigan to Alice and John Pines. After losing her mother at 3 years old, Anita was raised by her father. A Russian immigrant, John served the United States during World War 1 and worked in Ford’s famous River Rouge Factory. Besides her father, Anita admired her older sister, Millie. Millie was 10 years older and served as a strong role model for Anita, as did other women in their Detroit Neighborhood. Anita’s neighbor Sonia and her mother became an extension of Anita’s immediate family. Anita developed a passion for reading and learning during her childhood. She graduated from Detroit Commerce high school’s business program in 1951. During school she worked in the administrative office of Cass Tech High School. She spoke fondly of taking the streetcar to get to work after school. After graduation she worked as an administrative assistant at R.C. Mahone. After high school, she was introduced to Jack Pitlock by mutual friends. Her and Jack loved to go on long drives around Detroit together while dating. The two got married at St. Augustine church and celebrated with friends and family in nearby Belle Isle Park, one of Anita’s favorite places. The couple bought their first home in Warren, where they began to raise their family. Anita’s children became extremely close with her father John, who lived with the family. As well her sister Millie’s family, who lived nearby. They had many family traditions together, including an annual trip to get the family Christmas Trees. Anita became known as the “neighborhood mom”. She helped care for many children in the area, who often joined the family for dinner. Anita was known for her specialties of City Chicken, Stuffed Cabbage, and Potato Pancakes. In 1976 the family moved to Anita’s final home in Sterling Heights. As the family grew up, Anita and Jack encouraged their children to pursue many interests, including sports, music, and art. Over the years they enjoyed family trips. Anita built a large collection of road maps because she was the family’s navigator. Anita’s favorite places were Southern California, Las Vegas, and Sanibel Island Florida. Sanibel Island nurtured Anita’s passion for seashell collecting, for which she was featured in a local newspaper after finding a rare, intact Junonia shell. She was also a critical member of the newly founded St. Jane’s catholic parish in Sterling Heights. She regularly served as a Sacristan helping organize parish events, was a founding member of the parish Women’s and Gardening Clubs, and became life long friends with her priest, Father Leon Page. Anita was an accepting and loving mother-in-law to all of her children’s spouses. She loved to grow her family and make new connections with people. Her and Jack loved to babysit their grandchildren and host family parties together until his death in 2000. Losing Jack was painful for Anita, but she was resilient and found renewed purpose in caring for her family and friends. She made several phone calls to family and friends per day, just to catch up or sing her famous rendition of “Happy Birthday”. She became an avid fan of youth wrestling, soccer, swimming, track, horseback riding, baseball, basketball, and football. She almost never missed one of her grandchildren’s events, regardless of the weather. Overall, she made a huge impact on the way her many grandchildren were raised. Anita continued to age with grace even as her health began to decline. She always handled adversity with a positive outlook and sense of humor. During her illness, her children cared for her. They cherished and supported Anita, the way that she had taught them and others to do. She adapted to changing circumstances like she had her entire life. When reading became too tiring she took up building jig-saw puzzles. During the pandemic she became an avid user of Facebook and Facetime. When many people across the world loss contact, Anita became even closer with her friends and grandchildren who live near and far. She is missed dearly by all of them, and many others. If you wish to make a donation in her name, her two favorite charitable causes were the March of Dime Organization which works to improve the health of mothers and babies - an issue that greatly impacted Anita's life AND St. Joseph’s Indian School which is a fully funded school that provides opportunities to under privileged indigenous children living in South Dakota. Anita was passionate about education and the indigenous cultures of the American West. Direct links to both charities can be found below: https://www.marchofdimes.org/giving/support-general.aspx https://give.stjo.org/site/Donation2?df_id=6740&6740.donation=form1&autologin=true&s_src=tnd&gclid=Cj0KCQjwuMuRBhCJARIsAHXdnqO7_l8r7KLEJMSnaG97qMun2E20bErl9hsuhrFimNiqUCSmIzMshk0aAheCEALw_wcB

The family of Anita O. Pitlock created this Life Tributes page to make it easy to share your memories.

Send flowers to the Pitlock family.