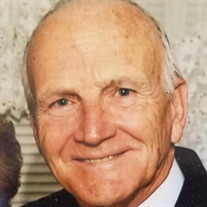 Aubrey Merle Zeller, age 96, passed away on April 5, 2022. He was born to the late Leona McIntyre and the late Charles Zeller on April 28, 1925 in Terra Alta, WV. He was the beloved husband of the late Leone. Loving father of Pamela (the late... View Obituary & Service Information

The family of Aubrey Merle Zeller created this Life Tributes page to make it easy to share your memories.

Send flowers to the Zeller family.