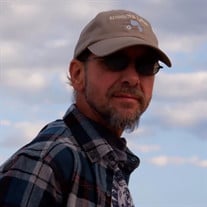 “Everybody Loves Bryan” Bryan ‘the Brain’ Van Wynsberghe, 57, longtime resident of Warren Michigan passed away in the comfort of his home on November 30, 2019 during a weekend filled with love, laughter and reminiscing with family and friends. He was taken far too soon by an aggressive tumor associated with the very vicious and very unwelcomed Cancer of the Esophagus. Bryan leaves behind the ‘love of his life’ (yes, direct quote for all the skeptics), Linda with whom he shared over forty years of partnership with, his beloved daughter, Ashley and his dearest Grand dogs Higgins and Niecee. He was the cherished brother of the late Gary (Candice) and Larry (Patricia), Brother ‘In-law’ to: Debbie (Bill), Bobby and Ronnie (Sherry) and treasured Uncle of: Gary, Kimberly, Albert, Lisa, Ray, Tracy, Brian, Brandon and Sarah as well as a Great Uncle to many Great Nieces and Nephews. Born in Detroit, Michigan, and loving son of the late Irene and Albert Van Wynsberghe . He graduated from Warren Mott High School class of 1980 where he met many of his lifelong friends. After High School he spent most of his career in drywallfinishing, although he was always lending a hand to relatives or friends with any number of projects, from building houses to fixing a washer for someone who needed it. And while he didn’t go to college, he did continue his education (possibly reluctantly at times) through helping Ashley with her homework all the way from Kindergarten to her fourth year in college. There wasn’t a book she was assigned that he didn’t read, but this was done very willingly as all she had to do was leave said books in the library aka… the bathroom. Bryan loved to read, especially books about Musicians, History and Biographies. He absolutely hated ‘Withering Heights’ and would not read that book, especially because it wasn’t even assigned. He did suffer through some Jane Austen though, proving he would do anything for his daughter, despite his high distaste for old English. There were so many things that Bryan loved- he loved to eat and although he didn’t cook or seem to know how to boil water he definitely knew his way around a grill or how to come up with creative things to put in a broiler when it was raining or too cold outside to use said grill. He was an avid craver of: breaded pork chops, Swedish meatballs, Belgian waffles + cookies, veal parmesan and cajun shrimp. He enjoyed watching old westerns, anything with John Wayne, American Pickers and even MeTVat times. Despite the rise in technology he remained pretty “old school”, choosing not to give up his trusty ‘flipper’ (flip phone)or create a Facebook profile. He was minimalistic and knew what really mattered. He was also a music enthusiast who could tell you the name of almost any song just as long as it was rock n’ roll, classic rock or heavy metal. He could also change the words of a song like no other. Bryan was always quick with a rhyme which is unfortunately not a talent of mine (that’s about as good as it’s gonna get). His easygoing personality always had him surrounded by friends- both new and old. Even after not seeing people for years they would pick up right where they left off. He had a love for the outdoors- whether that meant catching tuna with some buddies on the outer banks of North Carolina, finding seashells with family on the sandbars in the Gulf, driftwood from the Great Lakes or his bucket list trip to the Badlands out west. He also enjoyed exploring waterfalls both streaming and frozen, and building massive and rule bending campfires which got him the nickname ‘Uncle Pyro’. Like many Michiganders, he had a love for hunting. However, he hunted for scrap bikes, scrap metal, and anything he could refurbish or pass onto someone else to enjoy. He also partook in accidental “hunting” which involved crashing into deer with motorized vehicles whether it be his vehicle or his brothers. Bryan was all about the scenic route and enjoyed quality time over quantity. One of his utmost loves however, after family was being at “the lake”- Higgins Lake specifically where he would spend any weekend possible and then some. He took pleasure in being with family and friends, boating and fixing up that ever so needy cabin. Here’s to the scenic route. Visitation will be Friday, December 6, from 5:00 PM until 9:00 Pm and Saturday, December 7, from 2:00 PM until 8:30 PM with a memory share beginning at 6:00 PM at the Sterling Heights Chapel of the E.J Mandziuk & Son Funeral Home 3801 18 Mile Rd, Sterling Heights, MI 48134 A Celebration of Life will take place Fourth of July weekend 2020 at Higgins Lake, MI. More details to follow.

The family of Bryan Mark Van Wynsberghe created this Life Tributes page to make it easy to share your memories.