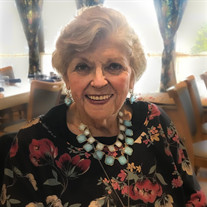 Catherine Joan Balowski, age 79, passed away at her home in Sterling Heights, MI on July 10th, 2021, peacefully amongst family and friends. Catherine Balowski was born in Detroit Michigan on March 4th, 1942, to Alice L. and Victor Z. (Krogulski) Gursinski. Catherine resided in Sterling Heights, MI since 1974 where she raised 8 children as a single mother. Although this was a full-time job, Catherine was also able to work outside of the home. For over 2 decades she worked within the Warren Consolidated School district providing before and after school care and assisting with the lunch program. Later in life, she would also work retail for Hudson Department store. Catherine was a dedicated and devout Catholic. From her early years of education from St. Clement in Centerline, MI, where she graduated in 1960, until her end of life, Catherine’s priority was her faith. Upon joining St. Rene Goupil Parish in the 1980’s, Catherine volunteered in so many parish programs, councils and groups. She assisted in the youth group, summer bible camps, annual picnic and funeral luncheon committees, singles club and was a proud member of the Legion of Mary. Being a part of this parish community blessed her with enduring lifelong friendships, spiritual guidance and a support system she humbly appreciated. Catherine was most proud to have been inducted into the Secular Franciscan Order on September 20th, 2005. Her life of family, faith, church and friendship was her legacy. She enjoyed praying the rosary, her grandchildren, and saying daily prayers. She devoted herself to the teachings of Father Solanus Casey, Saint Kateri Tekakwitha, and all the scriptures of the holy roman catholic Bible. She is survived by her brother, Dennis Gursin, her sister Linda Gursinski, her children Bryan (Nancy) Balowski of Fraser, MI, Donald Balowski (Rose) of East Detroit , MI, Christopher (Tammy) Balowski of Roseville, MI, Victor Balowski (Kim) of Shelby Township, MI, Cathy Balowski (Dave) Madison Hgts, MI, Robert Balowski (Wendy) of Madison Hgts. MI, Patricia (Rebecca) Wood of Fowlerville, MI; daughter in law-Jennifer Balowski of Warren, MI., her grandchildren David (Brianna) Balowski, Paul Balowski, Alex Balowski, Alexis Heinrich, Austin Balowski, Gabriel Balowski, Angel (Austin) Ford, Madison Balowski, Brianna Balowski, Emmersyn Balowski, Allyson Balowski, Arle Balowski, Xavier Wood and Joseph Wood; her great-grandchildren; Hope, Faith, Clay, Jacob, Paul, Wyatt and Natalie, and of course many nieces, nephews, and dear friends. She was preceded in death by her parents, brothers Alvin and Don, loving companion Ronald and beloved son Thomas Balowski.

The family of Catherine Joan Balowski created this Life Tributes page to make it easy to share your memories.

Catherine Joan Balowski, age 79, passed away at her home in Sterling...

Send flowers to the Balowski family.