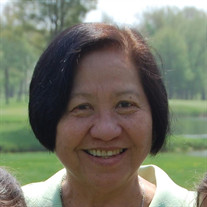 Cristina Susmiran Cambare, 78, of Sterling Heights, MI passed away at home surrounded by family on August 2, 2020. Visitation services will be on held Sunday August 9, 2020 from 2pm to 8pm at E.J. Mandziuk and Son Funeral Home in Sterling Heights, MI. Novena prayers to follow at the Cambare Family Home. Funeral services will be held Monday August 10, 2020 at St. Anastasia Roman Catholic Church. Viewing at 9:30am with funeral service to follow at 10am. Private burial will follow at a later time. Cristina was born in Cagayan de Sulu, Philippines to Porfirio and Asira Susmiran on December 15, 1941. She graduated from Manila Central University (college of nursing) with a Bachelor’s degree in Nursing with her best friend Virgencita Cedro. In 1969, she began working as a Registered Nurse for the Detroit Medical Center (Hutzel Hospital) for over 30 years. Cristina was devout catholic who lived her life through her faith. On December 18, 1971 Cristina was joined in holy matrimony to Jose Cambare at Old St. Mary’s Catholic Church in Detroit, MI. She was a devoted wife, mother, lola (grandmother), sister, tita (aunt), ninang (godmother) and friend. Her unconditional love extended out too many others who considered her a second mother and grandmother as well. Cristina is preceded in death by her husband Jose Cambare, her parents Porfirio and Asira Susmiran, and her brothers Porfirio Susmiran Jr. and Medardo Susmiran. Cristina will be lovingly missed by her children Judith Cambare, Joselyn (David) Pontzious, and Joel (Heather) Cambare; her siblings the late Medardo (Crispina) Susmiran, Adelaida Susmiran, Teresita (the late Wilfredo) Mendoza, Arsenio (Agripina) Susmiran, and Maryann (George) Toma; her grandchildren Celina and Elijah Cambare, Anna and Grace Pontzious; and many nieces and nephews. In lieu of flowers, donations may be made to St. Anastasia Roman Catholic Church in Troy, MI, The National Kidney Foundation www.kidney.org or The American Kidney Fund www.kidneyfund.org For a live streaming of Cristina's service please visit the St. Anastasia Catholic Church Facebook page : https://www.facebook.com/St-Anastasia-Catholic-Church-117938694899678

Cristina Susmiran Cambare, 78, of Sterling Heights, MI passed away at home surrounded by family on August 2, 2020. Visitation services will be on held Sunday August 9, 2020 from 2pm to 8pm at E.J. Mandziuk and Son Funeral Home in Sterling... View Obituary & Service Information

The family of Cristina Cambare created this Life Tributes page to make it easy to share your memories.

Send flowers to the Cambare family.