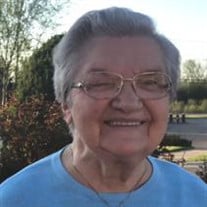 Czeslawa Bilek was called to be with her Lord and Savior Jesus Christ on March 18, 2021. She passed away peacefully in the presence of her daughter Danuta at Beaumont Hospital in Troy, Michigan USA after receiving her last rights. Czeslawa was born on February 7, 1926 in Dlutowka, Poland. She was the second child of Jozef and Stanislawa Parciak. She had one older brother, Jozef, two younger sisters, Kazimiera and Teresa, and four younger brothers, Stanislaw, Zygmunt, Jerzy and Benedykt. They all survived the second World War. Her oldest brother was mortally wounded after coming home from Germany, where he had been a forced laborer. At the end of the war she was ushered with other young people to dig antitank trenches for Vehrmacht. She managed to escape and return home. She finished school in 1948 and became a school teacher. A few years later she met Czeslaw and after they were married in 1950 they became Czeslaw and Czeslawa Bilek. They later raised four children together; Janusz, Zbigniew, Danuta and Jadwiga. Both of Czeslawa’s parents were US citizens and her mother migrated back to the US in the early 1960s. This later allowed Stanislawa to bring Jerzy, Benedykt, and Czeslawa along with her family to the US. Czeslawa and her family settled in Detroit, Michigan where she worked for many years at North Detroit General Hospital. All of her children married and left home to start their own families. After retiring she moved with Czeslaw to Sterling Heights, where she was a proud and active parishioner of Our Lady of Czestochowa Church. One of her best life experiences was traveling to the Holy Land with members of her church group who later became her lifelong friends. Czeslawa is survived by her siblings: Kazimiera Salach and Zygmunt (Stanislawa) Parciak. She is survived by her children: Janusz (Bozena) Bilek, Zbigniew (Halina) Bilek, Danuta Bilek, and Jadwiga Sonnenberg. She is survived by her grandchildren: Mark (April) Bilek, Piotr (Kelly) Bilek, Annette Bilek, JoAnn (Thomas) Rymsza, Olivia (Daniel) Landau, Christian Goryn, Christopher Sonnenberg, and Monika Sonnenberg. She is also survived by her great grandchildren: Mitchell, Alyna, Noah, Logan, Maximus, Emma, Matthew, Jack, Rylan, Katarzyna, and Raleigh. She passed away at the beautiful age of 95. Please keep her in your prayers.

Czeslawa Bilek was called to be with her Lord and Savior Jesus Christ on March 18, 2021. She passed away peacefully in the presence of her daughter Danuta at Beaumont Hospital in Troy, Michigan USA after receiving her last rights. Czeslawa... View Obituary & Service Information

The family of Czeslawa Bilek created this Life Tributes page to make it easy to share your memories.

Czeslawa Bilek was called to be with her Lord and Savior Jesus...

Send flowers to the Bilek family.