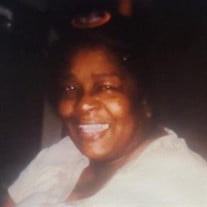 Loving Wife, Mother, Grandmother, Sister, and friend~ Darlene Renee Rorick,, of Sterling Heights, Michigan, passed on March 10, 2021 at the age of 61. She was born to the union of Everett Johnson Jr. and Mildred Johnson in Detroit, Michigan on July 15, 1959. Darlene was the 3rd of 5 children, Vanessa, Everett III, Anthony and Sandra. Darlene graduated from Martin Luther King High School in 1977. She then attended a technical school for computer's. She met and married Rickey Morgan Sr. and together they had 3 children, Thalia Morgan, Rickey Morgan and Tiara Morgan. In 2000 she married Joseph Rorick and they lived a happy life for 21 years. In that union she became a born again Christian willing and happily doing the lords work and serving at her church. Darlene loved spending time in the kitchen preparing new and old recipes for her family. Everyone she knew had a forever home in her heart and was always welcome in her home. She became a honorary mother to many. She was always smiling and willing to help anyone in their time of need. Her battle with serious medical conditions in recent years showed how courageous she was in facing life challenges with a smile. Despite the pain, Darlene came out a hero and stayed strong until the end. Darlene leaves behind to cherish in her loving memory a husband, Joseph Rorick; Three children, Thalia Morgan, Rickey Morgan Jr, and Tiara Morgan; ex-husband, Rickey Morgan Sr.; Two sisters, Vanessa Johnson and Sandra Johnson; Two brothers, Everett Johnson III and Anthony Johnson; Two adoptive Sisters, Beverly Stokes and Jacklyn Stewart; Two Grandchildren, Paige Wright and Logan Wright; and a host of nieces, nephews, friends and family. Legacy of Love A wife, a mother, a grandmother too, This is the legacy we have from you. You taught us love and how to fight, You gave us strength, you gave us might. A stronger person would be hard to find, And in your heart, you were always kind. You fought for us all in one way or another, Not just as a wife not just as a mother. For all of us you gave your best, Now the time has come for you to rest. So go in peace, you’ve earned your sleep, Your love in our hearts, we’ll eternally keep.

Loving Wife, Mother, Grandmother, Sister, and friend~ Darlene Renee Rorick,, of Sterling Heights, Michigan, passed on March 10, 2021 at the age of 61. She was born to the union of Everett Johnson Jr. and Mildred Johnson in Detroit, Michigan... View Obituary & Service Information

The family of Darlene Renea Rorick created this Life Tributes page to make it easy to share your memories.

Send flowers to the Rorick family.