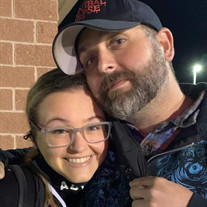 David James Herkelrath, died Saturday, February 27, after a bravely fought nine-month battle with stage 4 pancreatic cancer. David approached his diagnosis with grace and composure; never once complaining or wanting to put anyone out. He was a model patient who was kind until the end. He was only 42 years old. David brightened all our lives when he was born in Traverse City, Michigan on March 24, 1978, the son of James Ferris Herkelrath and Lynette Kay Logan and beloved little brother of Lisa. He lived his youth in Onekama, Bear Lake, and Pierport, and adult years in the Detroit area. In 1996, like so many generations before him, David graduated from Onekama High School where he excelled at basketball and football. The pride and joy of David's life was his beautiful daughter, Olivia. Born 17 years ago, she brought much joy to her devoted father who enjoyed trips up north with her, attending her dance recitals, cooking for her, and just hanging out with her. She will continue to be a bright light to all of us and a living legacy of her wonderful father. A talented and self-taught musician, David took an interest in drumming when he was just a little guy after jamming on his cousin's drum set. He pursued his musical passion for several years after high school as the drummer in the Detroit-area band, Today I Wait. Recording and touring created many memories, lots of fans, and life-long friendships. David was an awesome chef! His extraordinary culinary skills combined with his laid-back people skills paved the way for a successful career in food and beverage at several Detroit-area restaurants/hotels. His most recent job was Executive Chef at Auburn Hills Marriott where he managed a full-service, upscale restaurant with a 750-person banquet facility. David's dedication, skill level, and practice of never asking anyone to do anything he would not do himself, earned him the respect of both his guests and employees. His culinary skills and laid-back manner were appreciated at home, too. Many family holiday dinners were prepared and served by him, with no worries or stress to anyone. But that was just who he was...That was just David. David loved the outdoors, especially hunting and fishing. He was a dedicated hunter and an excellent shot. With hunting in his blood, when October rolled around, he started ramping up for white-tail season! From the time he could talk he was always "getting the big buck", which he did every year while hunting with his dad. His patience helped to make him an excellent angler. As a young boy he enjoyed surf fishing from the shores of Lake Michigan with his dad and sister, Lisa. As an adult, one of his favorite pastimes was fishing the streams and rivers of Manistee County, either with his dad or by himself. His go-with-the-flow nature, non-judgmental attitude, and good sense of humor made him fun to be around. David could often be found with friends and family enjoying a round of disc golf, shredding the slopes on his snowboard, playing video games, or watching an episode...or two of South Park. To know David, was to love him. David was gentle natured, kind spirited, and an open communicator. Many of us never heard him raise his voice in anger or say an unkind word about anyone. These qualities not only helped nurture a successful co-parenting relationship with Olivia's mother, Michelle Loding, but also made him the go-to guy for children and a favorite of cats and dogs...They all loved him. David is survived by his daughter Olivia Loding, parents Jim (Cindy) Herkelrath and Lynette Logan (Dan Birchmeier), sisters Lisa Herkelrath (Aaron Beyette) and Marlee Gale (Cory), brother Ben Heinrich (Jenny), and girlfriend Sarah Winkelman and her daughter Adrianna. He is also fondly remembered as a dear uncle, beloved nephew, and special cousin. He will be so very missed. David was preceded in death by his infant brother Jamie, paternal grandparents Ferris and Ann Herkelrath, maternal grandparents John and Joan Logan, and uncles Dennis Herkelrath and Ed Emmons. David was a giver...His warm, generous, loving hugs being one example. His last gift was the selfless act of donating his organs. A celebration of life will be held at a later date.

David James Herkelrath, died Saturday, February 27, after a bravely fought nine-month battle with stage 4 pancreatic cancer. David approached his diagnosis with grace and composure; never once complaining or wanting to put anyone out. He was... View Obituary & Service Information

The family of David James Herkelrath created this Life Tributes page to make it easy to share your memories.