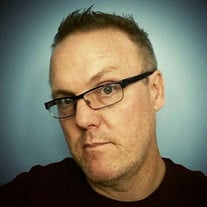 David Allen Leach, age 54, passed away suddenly on December 29th, 2020. David was born on February 1, 1966 in Grosse Pointe, Michigan and resided in Sterling Heights at the time of his passing. He is survived by his wife and soulmate of over 30 years, Leah Leach (neé Zack), and his three children; Alexandra (29), Joshua (25), and Maia (20). He is also survived by his mother Sharon Middleton (neé Bogle), stepfather William Middleton, stepmother Glenda Leach, sister Vicki Dobbs (neé Leach), brother in-law Christopher Dobbs, father in-law Robert Zack, mother in-law Anita Zack, and many dear aunts, uncles, cousins, and friends. He was preceded in death by his father, Lawrence Leach and his beloved grandparents. David worked in the networking security sector as a Principal Architect for AT&T for over a decade. David, or Dave, loved his family dearly and absolutely loved being a father to his three children. He was there for every piano recital, swim meet, and baseball game. His character will always be described as generous, compassionate and full of personality. He enjoyed martial arts and earned his black belt title in Taekwondo. This might explain the occasional (possibly unnecessary) ninja rolls and general fearlessness of his character, but his mom would say he was born that way. Dave was usually up for a challenge, and loved to push any boundary put in front of him. He competed in the Detroit Half Marathon, Swampfoot 4 Mile; an obstacle competition, and other (less dangerous) 5Ks. He also loved playing tennis with his family, and occasionally competing in doubles with his son, Joshua. He also enjoyed playing guitar and long nights of Euchre. David will be remembered as being full of life. He is incredibly missed by all of his family and friends. A celebration of Dave’s life will be held at a later date. In remembrance of David’s life, the family asks that any charitable donations be made to the Crohn’s & Colitis Foundation at www.crohnscolitisfoundation.org.

David Allen Leach, age 54, passed away suddenly on December 29th, 2020. David was born on February 1, 1966 in Grosse Pointe, Michigan and resided in Sterling Heights at the time of his passing. He is survived by his wife and soulmate of over... View Obituary & Service Information

The family of David Allen Leach created this Life Tributes page to make it easy to share your memories.

Customized sympathy cards. Mailed for you.