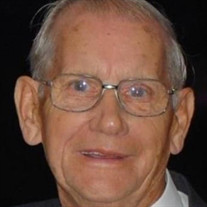 February 13, 1929 - April 10, 2020 Edward Brown was called to be with his Lord and Savior Jesus Christ, passing peacefully at his home in Sterling Heights, Michigan on April 10, 2020, while surrounded by family. He was 91 years old. He was... View Obituary & Service Information

The family of Edward Brown created this Life Tributes page to make it easy to share your memories.

Edward Brown was called to...

Send flowers to the Brown family.