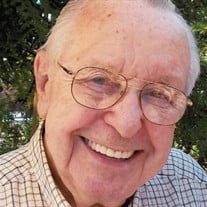 Edwin Laabs was a devout Catholic to whom faith, family and country meant everything. Born in Detroit on October 3, 1926, Edwin was the first of two sons born to Edwin G Laabs and Edna (Fitzpatrick) Laabs. At age two Ed lost his mother and infant brother, Richard, to influenza and he was left in the loving care of his maternal grandmother, Christie Ann Fitzpatrick, whom he called “Honey”. “Junior” as his family called him, was raised by his grandma and uncles, and surrounded by cousins. He would be the first to say that he had a truly happy childhood. Edwin graduated from Cooley High School, having excelled in math and science. After graduation he enlisted in the United States Navy, eager to defend his country during World War II but would have to wait until his eighteenth birthday to enter. Two weeks before he would leave for boot camp, he held his beloved grandma’s hands as she peacefully died. He attended boot camp at Great Lakes Naval Training Center in Illinois. He would go on from there to machine gun school and radio operator school. For the remainder of the war he worked in Naval Aviation, as a radio operator and gunner. Home from the Navy just a few weeks, he was set up by friend on a blind date with Joan VanMarter. They danced and laughed all night long. He would often say that she was the best thing that ever happened to him. During the five years they dated, he worked at Kroger, owned and operated a 7-UP delivery truck and worked as a merchandiser for Gerber. Ed and Jo married on August 19, 1950, after his conversion to Catholicism. When he married Joan he also took in her mother Anna, who lived with them until her death in 1973. He loved her like she was his own mother. In 1952, Ed began working at the Ford Motor Company. First on the line as a material handler and “when they found out I could read and write, they made me a clerk”. During his years at Ford, he worked his way up to a plant supervisor. 1952 was also the year when Ed became a father, a role that would bring him immense joy throughout his life. Having a busy household with five children and a mother-in-law and several dogs brought him great happiness. Everyday was an adventure full of love and laughter. The family loved camping, fishing, swimming, and sailing. He was an avid reader, devouring several books a week. Ed had a love of cars, playing the organ and harmonica, and cherished his Wednesday card games with Joan’s sisters, nieces and nephews. His favorite pastime was spending time with his children, grandchildren and great-grandchildren. The last six months of his life were spent with frequent hospital visits. Ed was a prayer warrior, spending many hours praying the rosary, dedicating his prayers to anyone who needed them, including many family members and friends. He had frequent stays in the hospital and always had a finger rosary in his hand. He would always put one on his bed tray, hoping that any visitors, doctors, and/or nurses would ask what it was, so he could explain it and give one to them. Ed always brought a dozen or so finger rosaries to the hospital with him, so he could pass them out freely. He felt this way he was fishing for souls on behalf of the Blessed Mother. There will be finger rosaries at the funeral home for everyone that wants one. Beloved husband of the late Joan Theresa for 67 years. Devoted father of Karen (Joseph) Broski, Judy (Tom) Schaefer, Amy (Jon) Sussman, Erin (Scott) Seelig, Edwin (Margie) Laabs. Cherished grandfather of Elizabeth (Andrew) Matz, Laura (Frank) Pierce, Joan (Pete) Sanders, Kate (Scott) McDermott, Sara (Alex) Yantis, Andrew (Amanda) Schaefer, Matthew (Rebecca) Schaefer, Tim Schaefer, Anna (Allan) Holmes, Benedict and Kolbe Sussman; Shane, Zachary, Molly and Allison Seelig; Patrick, Emily, Haley, Joseph, Julie, Bartholomew, Michael and Charlotte Laabs. Proud great-grandfather of Nicholas and Nolan Matz; Seth, Gwen, Liam and Leitha Sanders; Grace, Sam and Julia McDermott; Luke Yantis; Declan, Koen, Teagan Schaefer; Caleb, Isaac and Jacob Holmes. In lieu of flower the family asks for donations to The Capuchins, Edwin’s favorite charity. www.thecapuchins.org

Edwin Laabs was a devout Catholic to whom faith, family and country meant everything. Born in Detroit on October 3, 1926, Edwin was the first of two sons born to Edwin G Laabs and Edna (Fitzpatrick) Laabs. At age two Ed lost his mother and... View Obituary & Service Information

The family of Edwin George Laabs Jr. created this Life Tributes page to make it easy to share your memories.

Edwin Laabs was a devout Catholic to whom faith, family and country...

Send flowers to the Laabs family.