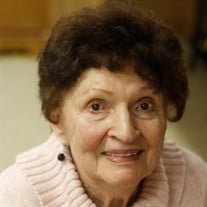 Eileen A. Wesley was born on January 5th, 1930 in Pontiac, Michigan. Graduating with her nursing degree from St. Joseph Mercy Hospital in 1951, she wedded Thomas Wesley later that year and enjoyed almost 70 years of marriage resulting in 9 children, 20 grandchildren, and 9 great-grandchildren. She was a loving mother to Thomas Wesley, Mary Light, Eileen Wesley (Sandra Graca), Michael Wesley (Paula), Maureen Augustyniak (Alan), Martha Clarke, Janice Grasl (Steve), James Wesley (Linda), and John Wesley. Beloved grandmother to Benjamin Light, James Light, Michael Light, Tina Wesley, John Wesley, Cathy Wesley, Dawn Wesley, Emily Augustyniak, Adam Augustyniak, Sarah Augustyniak, Rachel Mashburn, Jack Clarke, Andrea Wright, Natalie Clarke, Catherine Clarke, Leah Grasl, Stephanie Anderson, Trenton Wesley, Cole Wesley, and Reid Wesley. Caring great grandmother to Jude, Wesley, Joseph, Evelyn, Oliver, and John Light, Brian and Jack Wesley, and Saili Mashburn. Eileen is preceded in death by her siblings Robert Reardon, Colleen Reardon, and Richard Reardon (Theresa Wesley). Caring for her large family brought her much joy and fulfillment from attending countless recitals, school sporting events, plays, programs, and graduations to encouraging and praying for them. Along with her church, family, and friends, Eileen devoted her time to many hobbies, mostly those involving her hands such as sewing, crocheting, quilting, playing the piano, making chocolate candies, and decorating cakes. She never pumped gas with those hands though. Riding her bike, reading, hanging out with her Red Hat Society and quilting circle friends, and dancing; especially ballroom and square dancing were her favorite pastimes. In the summer, she attended church festivals weekly with her husband Tom, brother Dick, and sister-in-law Terri, as well as other friends, enjoying a break from cooking while dancing until her feet hurt. One might not have guessed she didn't enjoy cooking because she prepared delicious meals and even volunteered as a children's camp cook and church cook. Christian service was at the heart of her volunteerism, which included co-leading a Girl Scout troop, sewing for the nuns, and serving as a parish nurse at St. Basil Church in Eastpointe. Later while a parishioner at St. Jane Frances De Chantal Church in Sterling Heights, Eileen sewed for donation projects and traveled on a short-term mission trip with her husband. After two daughters became flight attendants, travel and adventure were more attainable for Eileen and she eagerly flew all over the world. Whether cruising to Alaska or Norway, rafting in the Tetons, dining in Paris, or gazing at the Great Wall of China, she welcomed exciting, new experiences. Eventually, when her health failed and she became unable to leave home or use her hands well, she took pleasure in watching a steady stream of old movies and Forensic Files on TV, while eating frozen custard or other favorite treats. Living to 91 meant most of her friends and family had passed, and she looked forward to the day of being reunited. She will be greatly missed but has left an enduring legacy to her loving family. "Mothers hold their children's hand for a while but their hearts forever" Our mother was an angel on earth and is now one in Heaven. In lieu of flowers the family requests donations be made to Feeding America. (https://www.feedingamerica.org/)

Eileen A. Wesley was born on January 5th, 1930 in Pontiac, Michigan. Graduating with her nursing degree from St. Joseph Mercy Hospital in 1951, she wedded Thomas Wesley later that year and enjoyed almost 70 years of marriage resulting in 9 children,... View Obituary & Service Information

The family of Eileen A. Wesley created this Life Tributes page to make it easy to share your memories.

Send flowers to the Wesley family.