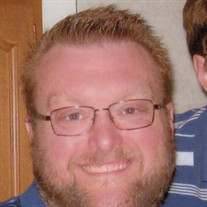 Eric Thomas Lutostanski 1974 - 2021 Eric Lutostanski, age 46, passed away unexpectedly at his home on May 19, 2021. A dependably kind and loving person, he has always been described as a “gentle soul” who would do absolutely anything for anyone. Eric will be greatly missed, especially by his sons Benjamin and Joseph who simply loved being with him. Through the years, they built great memories participating in Boy Scouts activities, youth sports, and swimming at the cottage. Whether they were strategizing in board games like Disney Villainous, watching food shows including their favorite--Guy’s Grocery Games, playing with their Great Dane Zeke, or just roughhousing together, their affection for one another was clear. In 1974, Eric was born to Anne and Tom Lutostanski. He grew up in a playful, loving household, with his older sister Jennifer and younger brother Michael. Their traditional, tight-knit, bustling community was full of family friends, teammates and classmates who took care of one another. With a rich Polish heritage, the Lutostanskis put family at the center of everything. With his father as his high-school principal, Eric was surrounded by family, even outside the home. He graduated from Bishop Gallagher High School in 1992 and was incredibly smart, witty and funny. He continued college as a proud graduate of Central Michigan University. (Fire up Chips!) He most recently worked as a patient care assistant, extending his care and kindness to others. He found great peace in the outdoors and was especially happy hunting up north with dad, fishing on the river, or enjoying the lake at the family cottage. When his father died unexpectedly in 2018, Eric lost his best buddy, but found comfort in these surroundings that were full of treasured memories. Eric appreciated the simple things, like a good meal and a good movie with his best pal, Zeke the wonderdog, at his side. He had a vast movie collection with a wide range of movie and trivia knowledge that was difficult to challenge. James Bond was his favorite, of course. He made a mean chili and was happy to share while playing cards, watching a game or hanging out with loved ones. Eric is survived by his sons Benjamin and Joseph Lutostanski; his mother Anne Lutostanski (Preslow); sister Jennifer (Michael Falasa); and brother Michael (Michelle Rusnica). He is pre-deceased by his father Thomas Lutostanski. He was a loving uncle to his nieces, Charlotte and Katherine, and his nephew Ethan. He had many loving aunts, uncles and friends. He was also a treasured “uncle” to multiple family dogs and pets throughout the years, but none so great as Zeke.

The family of Eric Thomas Lutostanski created this Life Tributes page to make it easy to share your memories.

Send flowers to the Lutostanski family.