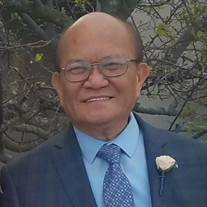 Felix Estabalaya Erfe, 72, of Sterling Heights, Michigan passed away on June 21, 2020 from complications of non-Hodgkin's Lymphoma. Felix is survived by his wife, Rosario Erfe, nee Salvador; his daughter Anne Marie Erfe; his siblings Teresita Aguinaldo, nee Erfe, Salvacion Erfe; and sister-in-law Reynalda Erfe, nee De Jesus. He is predeceased by his parents, Ana and Raymundo Erfe, his brother Antonio Erfe, and his brother-in-law Venancio Aguinaldo. Felix was born on October 12, 1947 to Ana and Raymundo Erfe in Igbaras, Iloilo, Philippines. He was the eldest child and a loving brother of Antonio, Salvacion, and Teresita. He studied mechanical engineering and became a CNC machinist. He immigrated to Windsor in Ontario, Canada in January 1971 with his relatives Charing and Jose. He later immigrated to the United States of America in 1978. He married Rosario Salvador on June 24, 1978 and was a devoted husband for 41 years. He became the devoted father of Anne Marie in 1981. He was a dear uncle to many nieces and nephews and loved by many cousins and friends. He was an employee of the Incoe Corporation for over 20 years and retired in June of 2018. He was an active parishioner of St. Jane Frances de Chantal Parish and has served as an usher, lector, and volunteer for years. He also was very involved in Bukas Loob Sa Diyos, a prayer group. We would like to express our gratitude for your love, support, and prayers over the last several weeks and especially now as we say goodbye. For those of you who are unable to join us due to the constraints posed by the global pandemic, we will plan a celebration of life in the future when conditions allow.

The family of Felix Erfe created this Life Tributes page to make it easy to share your memories.

Send flowers to the Erfe family.