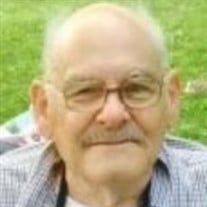 Francis "Pete" Smith Sr., the beloved husband of Elaine, passed into heaven on July 28, 2021 surrounded by his family. Pete and Elaine built their lives together living in the same home in Warren for 59 years. They built a family and he was the loving father of Shirley Russell, Francis Smith Jr., Kathleen (Greg) Michealson, Tracey (Aaron) Yacks and Brian (Susan) Smith. Pete always made his children, and later his grandchildren, the focus of his life. He lovingly welcomed 19 grandchildren: Becca Russell, Tim Russell, Joshua Smith, Jon Russell, Jacob Yacks, Erik Michealson, Evan Michealson, Kaitlynn Smith, Noah Yacks, Patrick Smith, Rick Russell, Nicole Michealson, Brie Smith, Jill Smith, Caleb Yacks, Liam Smith, Ellie Yacks, Nolan Smith and Maryn Smith. Pete was also dedicated to service of his country and city. He was an Army veteran. He owned a Mobil gas station at Hupp Road and Van Dyke. He then became a Warren Police Officer for 27 years in various positions including Corporal and Detective. Pete was also an active member of the Warren Fraternal Order of Police until his death. He was a proud supportive parishioner at St. Mark Catholic Church for almost 60 years where he also volunteered weekly in the Usher's Club His favorite things in the world were his family, friends and grandchildren. He will be dearly missed by all who knew or interacted with him. Pete was predeceased by his parents, Alfred and Delia (Couwlier) Smith and siblings, Alfred “Bud” (Gloria) Smith, Eileen Smith, Elaine (Ed) Deyo, Norman “Rudy” (Mary) Smith and Dolores “Toots” (Stewart) McGuire. Visitation will be held at the Mandziuk Funeral Home, Sterling Heights Chapel at 3801 18 Mile Road Sterling Heights, MI 48314 on Sunday from 4-8pm, and Monday from 2-8pm with a rosary at 6:30pm. Pete will lie in state at St. Mark Catholic Church 4401 Bart Avenue, Warren MI 48091 at 9am followed by mass at 9:30am. Pete will be buried at Resurrection Cemetery with a luncheon to immediately follow at Fern Hill Golf Club. In lieu of flowers, memorial contributions may be addressed to St. Jude Children's Hospital.

Francis "Pete" Smith Sr., the beloved husband of Elaine, passed into heaven on July 28, 2021 surrounded by his family. Pete and Elaine built their lives together living in the same home in Warren for 59 years. They built a family and he was... View Obituary & Service Information

The family of Francis "Pete" Smith Sr. created this Life Tributes page to make it easy to share your memories.

Send flowers to the Smith family.