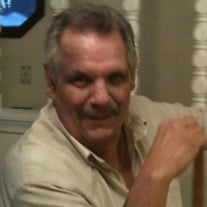 Frank Tresnak, 67, of New Baltimore, MI, died January 27, 2021 in Ocala, FL. Frank was born July 27, 1953 in Detroit, MI to Frank and Madoline (Cornell) Tresnak. He graduated in 1971 from Lakeshore High School in St. Clair Shores, MI. He served in the United States Marine Corp 1972 to 1978. He received his Tool and Die Maker Apprenticeship from the Detroit Institute of Technology in 1980. He worked at Active Tool and Die for 23 years, and retired from Chrysler in 2015. Frank enjoyed trips to the casino, spending winters in Florida in his RV, and traveling with his wife and their Shetland Sheepdogs to attend dog shows. He also enjoyed going to his mother’s house once a week to help her out, and spend the day watching soaps. His other hobbies included bowling and golf. He is survived by his wife of almost 38 years, Deborah (Otterson) Tresnak, mother Madoline Tresnak, daughters Donna (Shane) Holz, Deanna (Kurt) Gunnells, brothers Al (Pam) Tresnak, Jeff (Ken Nisch) Tresnak, sisters Ann (Steve) Gurne, Jennifer (Mark) Brohl, and several nieces, nephews, great nieces and great nephews. He was preceded in death by his father, Frank Tresnak, Sr. Visitation will be Saturday, February 6, 2021 at E.J. Mandziuk Funeral Home, 3801 18 Mile Rd., Sterling Heights, MI 48314. Immediate family from 2:00 pm -3:00 pm, 3:00 pm-8:00 pm for friends and extended family. Prayer service will be at 5:00 pm, and military honors at 5:30 pm. He will be cremated at a later date. In lieu of flowers, donations can be made to the American Lung Association.

The family of Frank Tresnak created this Life Tributes page to make it easy to share your memories.

Send flowers to the Tresnak family.