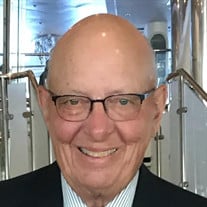 A Life Well Lived... Born on the Eastside in Grosse Pointe the always fun, usually happy and seemingly larger than life &#8220;Husband, Dad, Grandpa and just plain Uncle&#8221; Fred has left this world now for a better place. As a youngster... View Obituary & Service Information

The family of Fredric Joseph Schulte created this Life Tributes page to make it easy to share your memories.

Born on the Eastside in Grosse Pointe the...

Send flowers to the Schulte family.