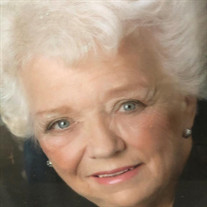 Gail (Jozwiak) Hadel (86) of Sterling Heights, Michigan passed away on Tuesday, Sept. 15, 2020 at Troy Beaumont Hospital leaving behind a legacy of love, family, compassion, and determination. Born in August of 1934, Gail was the daughter of Anthony and Theresa Jozwiak (nee Dobrzelewski), both of whom were children of large Polish families. Anthony (six siblings) and Theresa (14 siblings) shared their modest family home on the east side of Detroit with many relatives and cousins, welcoming all with hugs and great food, thereby setting the example their daughter would follow. As a child, Gail was somewhat of a tomboy, playing basketball and fencing on girl’s teams during the school year, while helping on the family farm in Gaylord, Michigan during summers. Additionally, she loved fashion, sewing, embroidery and cooking. She attended both Dominican and St. Thomas High Schools as well as Patricia Stevens Modelling School. Gail began her work career in High School as a bookkeeper at Woods Construction Company in Detroit and held sales positions at Neisner’s and J.L. Hudson Co. Never shy about seeking new opportunities, Gail’s career included positions in accounting and payroll at Chrysler Corporation, NuCar Driveaway, ASR Multiconstruction, and she retired from EDS (Electronic Data Systems). In 1954, Gail married the love of her life, Charles Hadel, and over the course of the next 11 years had four children, Karen (1955), Dale (1957), Dennis (1961) and Daniel (1965). Over this same time, she successfully juggled her roles as wife, mother and homemaker with that of her professional career. This was all done prior to the Women’s Lib movement and when the time saving conveniences of pre-packaged foods, microwave ovens, and no-iron fabrics did not exist. Her planning, multi-tasking and delegation skills were incredible. Always a go-getter, and against the will of her husband, Gail took driving lessons on the Q.T., which allowed her to take a part-time position as a School Bus Driver and ease back into the work world with a job that would accommodate her children’s school calendar. The standing family joke was that if someone told Gail she could not fly an airplane, she’d just consider it a challenge to over come and actually learn to do so. When she wanted a cabinet under the bathroom sink, she built it herself. New sofa? No problem, she simply reupholstered the old one, adding a skirt and different trim. Her favorite expression was, “there’s no such thing as CAN’T”! Although impressive, Gail’s accomplishments were not limited to her family and work, as she had a strong desire for continual learning, volunteerism, and entrepreneurship. She somehow always found time to take a new class, help at church and school events, pull a practical joke (particularly on April Fool’s Day) and saw an opportunity to start a small business (Everybody’s Tops), selling t-shirts at local craft fairs. She is survived by her sister, Marie Palmer, her children and their spouses (Karen and (Mark) Ebben, Dale and (Nancy) Hadel, Dennis and (Terrie) Hadel, and Daniel and (Janice) Hadel) along with five grandchildren (Krista Bamberger, Kimberly Hampton, James Hadel, Don and Gayle Ebben) and five great grandchildren (Charlie, Hailey, Piper, Lucas and John James). Gail will be remembered for her courage, confidence, kindness, big hugs, great recipes, ambition and drive, her generosity and her love of life, all traits she has shared and passed on to those who loved her. The family suggests those wishing to make a memorial donation in Gail Hadel’s memory consider the Pulmonary Hypertension Association at https://phassociation.org/donate/

Gail (Jozwiak) Hadel (86) of Sterling Heights, Michigan passed away on Tuesday, Sept. 15, 2020 at Troy Beaumont Hospital leaving behind a legacy of love, family, compassion, and determination. Born in August of 1934, Gail was the daughter of... View Obituary & Service Information

The family of Gail Hadel created this Life Tributes page to make it easy to share your memories.

Send flowers to the Hadel family.