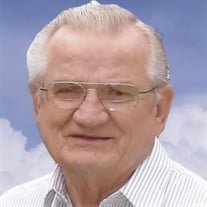 Huless Lee Bolton, age 91, of Warren, MI, passed away on Monday, December 7, 2020. He was born on September 27, 1929 in Guntersville, Alabama to his parents Robert and Fannie Bolton and was one of five siblings. He worked on a farm with his family for many years. He had many nieces and nephews that he kept in contact with and was blessed to have seen most of them at a family reunion in June 2012. He loved sharing all the stories about their lives growing up in Alabama. In 1959 when he was 30 years old, Huless, enlisted in the U.S. Army. He was honorably discharged on October 13, 1962 and received a Good Conduct Medal. He worked at Briggs Manufacturing until they moved out of state and he took a job at Chrysler. He retired from Chrysler on December 31, 1998. He moved to Michigan after he was discharged from the Army. He loved to tell stories of how he had a picture of the woman he would marry in his dreams. When he met her he said she was the one he was meant to spend the rest of his life with. He married his late wife, Irene Rogers, on December 7, 1969 and accepted her five children as his own. They were happily married until her death in December 2003. He was a loving husband, father, grandfather, great grandfather, great great grandfather, uncle and friend. Everyone who knew Huless fell in love with him, he was truly a southern gentleman. He is survived by his children: Margaret Staniszewski (The late Chester), Mary Ann (Daniel) Wisniewski, Connie (deceased) and (John) Gisevan, Wanda Rogers and Eddie (Naomi) Rogers. He had 11 grandchildren: Sherry (John) Nitecki, Lisa Staniszewski, Chester (Stefanie) Staniszewski, Daniel (Christa) Wisniewski, Christine Pajor, George (Kara) Pajor, Elizabeth (Joshua) Braun, Katherine (Drew) Goulette, Charlie (Amanda) Penrod, Cheryl Rogers and Eddie (Chinaron) Rogers. He had 23 great grandchildren: John, Anthony, Isabella Nitecki, Victoria, Angelina, Jillian, Gjon Nikollaj, Brendan Wisniewski, Chester, Daniel Staniszewski, Michael Brooks, Madison, Delilah Pajor, Kenny Whitte, Camelia, AJ Goulette, Quinn, Wesley Penrod, Carter, Jaylen, Makayla and Thalia Rogers. Also, two great great grandchildren: Nico Roth and Ajvy Leopold. He loved to sing and watch sports with Nick Sherevan and also loved Zachary Roth and Salvador Leopold as part of our family, too.

Huless Lee Bolton, age 91, of Warren, MI, passed away on Monday, December 7, 2020. He was born on September 27, 1929 in Guntersville, Alabama to his parents Robert and Fannie Bolton and was one of five siblings. He worked on a farm with his... View Obituary & Service Information

The family of Huless Lee Bolton created this Life Tributes page to make it easy to share your memories.

Send flowers to the Bolton family.