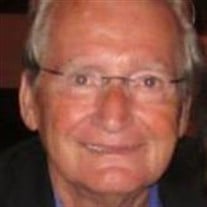 Jim was born 4/28/1938, in Detroit, Michigan. Jim was the youngest child of German born father, John Chestnick and German mother Leona Schwarm. During his early childhood, Jim lived in Detroit with his brothers John, Richard, and Tom and his sister Katie. Later in his youth his family moved to a St Clair Shores home with lake access. Jim and his brother Tom enjoyed fishing. Every day they would go fishing in the morning, even before school at times. In the winter they would also go ice fishing. They both loved the sport and became avid anglers later in life. Jim attend Lake View High School and graduated in 1957. After graduation, Jim worked as a file clerk for Chrysler. Jim met the love of his life, Margaret, after picking up his good friend Paul Level. Jim spotted Margaret, this very attractive brunette, on the front porch of her sister Gloria’s home. Jim asked Paul about Margaret, Paul set up the introduction and it was love at first sight. Jim and Margaret were married January 17, 1959 at St. Joan of Arc Church in St. Clair Shores, Michigan. In 1960, Jim was drafted into the U.S. Army. He attended military basic training in Ft. Leonard Wood, Missouri and was later sent to Germany. While in Germany, Margaret was able to join him for a short vacation. They toured Berchtesgaden, Germany as well as Austria and Switzerland. This vacation created many fond memories they would talk of for years to come. Jim returned home in 1962. Jim attended Art Schools in Detroit and in St Clair Shores to pursue his interest in art. He applied for employment at General Motors and was hired into the graphics design department. While at GM, Jim had one patent and several suggestion awards. Jim and Margaret became the proud parents of Lisa Ann in 1964 and Eric James in 1967. He always enjoyed projects around the house and golfing, but the joy of his life was always his family. Jim worked for GM for 32 years, retiring in 1997. During retirement he enjoyed the Sunday golf league, traveling with Margaret and spending time with his grandchildren Lauren, Taylor, Samantha and Benjamin. Jim is survived by his wife Margaret and two children Lisa (Andre) and Eric and his four grandchildren Lauren (Cameron), Taylor, Samantha and Benjamin.

Jim was born 4/28/1938, in Detroit, Michigan. Jim was the youngest child of German born father, John Chestnick and German mother Leona Schwarm. During his early childhood, Jim lived in Detroit with his brothers John, Richard, and Tom and... View Obituary & Service Information

The family of James Raymond Chesnick created this Life Tributes page to make it easy to share your memories.

Send flowers to the Chesnick family.