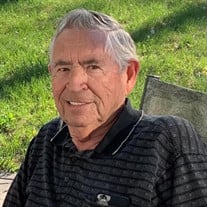 James “Jim” Robert Hartshorn of Sterling Heights MI, 82, died Sunday, January 31, 2021 from complications of leukemia. He leaves behind his wife of 60 years, Bonnie Lee (nee Fisher); brother George Richard “Dick” Hartshorn; son Glenn and wife Theresa Hartshorn; daughter Wendy and husband John McQuiston; Granddaughter Erica and husband Mark Verkest, Grandson Joshua Corbin and wife Brooke, Granddaughter Allegra Corbin and fiancé Jason Field, and Grandson James Hartshorn. He has 3 great grandchildren, Grady Verkest, Everly Verkest and Blakely Corbin and two step-grandchildren, John McQuiston IV and Jenna McQuiston. Jim was born on May 22, 1938 in Windber, Pennsylvania. He graduated from Westmont High School in 1956. He was in the National Guard Tank Battalion as a Tank Commander. In 1958, he met Bonnie Lee Fisher at a roller rink, dated her and proposed to her at her Senior Prom. They married on October 9th, 1960. Jim was working for Westmont Borough as a heavy equipment operator. They were blessed with their first child, Glenn, in February of 1962. In pursuit of better opportunity, Jim and Bonnie packed up Glenn and came to Michigan where Jim was eventually hired by Koltanbar Engineering. In 1965, they were blessed with their daughter, Wendy. Jim began working for Ford Motor Company in 1971 where he prospered as a Mechanical Engineer and then a Process Engineer in the Truck division. He was responsible for multiple vehicle launches including the first Ranger, traveled to various plants across the country as a leader, and ultimately was the launch leader for the first Expedition, a great source of pride for him. Jim and Bonnie were avid travelers who loved exploring together throughout their life. They traveled to numerous island destinations with the Nomads, a Detroit-based travel club and enjoyed tropical adventures together. In addition, they traveled all over the country in an RV with their children building memories and strong family bonds. Dairy Queen was a frequent stop along the way as were many Walmart parking lots. Upon retirement, they continued traveling RV style in their 38’ Diesel, towing a car for thousands of miles, exploring as many National Parks as possible. They belonged to the Holiday Rambler Recreational Vehicle Club and were members of the Ramble Lairs chapter where they met many people who became cherished friends. For the last 25+ years, they have wintered mainly in Florida most recently staying at the Riverside RV Resort. Jim was part of a motorcycle club there and was known as the guy to call if anyone needed help with anything mechanical. Their Florida life allowed them to spend more time with Jim’s brother Dick as well. In addition to traveling, Jim had many hobbies he enjoyed which included building and flying RC airplanes and going to car shows with his ’67 Corvette. He was a member of the Radio Control Club of Detroit where he enjoyed meeting others and flying his airplanes with them. His little fur buddy, Ruffey, was a source of joy over the last 8 years. Jim lived a blessed and full life; he was truly a family man who was proud of his wife, children, grandchildren, great grandchildren and all of their accomplishments. He was a loving, selfless, kind, compassionate person to all he knew. We find peace knowing he is no longer in pain and celebrating in heaven with those who have gone before him. We will see you again, Jim, Dad, Grandpa. Enjoy paradise, fly high and watch over us all! In lieu of flowers, please donate to the charity of your choice. Jim was a supporter of Michigan Humane Society, St. Jude’s Children’s Research Hospital or Hospice of Michigan.

The family of James Robert Hartshorn created this Life Tributes page to make it easy to share your memories.

Send flowers to the Hartshorn family.