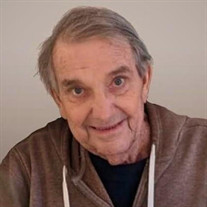 James J. Rivard, 82, of Sterling Heights, MI died on March 5th, 2022. James was born on February 8, 1940 in Bay City, MI to Raymond and Victoria (Justa) Rivard. He was preceded in death by his wife of 53 years, Mary Ann (Sushinsky) Rivard. James is survived by his daughter Kristen Rivard, son Mark Rivard (Joanna Sganga), and three grandchildren, Geneva, Vienna, and Julian. Also; survived by brother Donald Rivard, sister Geralyn McComb (Michael), sister in laws Faith Ann Rivard, Lynn Rivard, and brother in law Dan Dell. He is additionally survived by many loving nieces, nephews, aunts, uncles, cousins and friends. James was also preceded in death by two sons Jonathan and Kenneth. Also predeceased by four brothers: Thomas Rivard, Frank Rivard, Robert Rivard, and Roger Rivard and five sisters: Barbara Rivard, Carol Rivard, Gloria Rivard, Elaine Dell, and Lorraine Kolka. James was a lifelong educator, a career he felt very passionate about. With over 4 decades of service, starting out as an assistant gym teacher at Assumption Grotto School in Detroit, achieving his Masters Degree, his Doctorate of Education, and ending his career as a tenured professor at Marygrove College, where he developed the program for Educational Doctorial Studies, as well as teaching educational law. He was recognized for his achievements both at the local and state level, as well as receiving a Presidential accommodation for his work in education. James married his best friend, Mary Ann, on August 10th 1963, and were together for days short of their 54th wedding anniversary. He was able to attend college on a football scholarship, and continued with a lifelong interest in football and other sports. “Jim” and Mary Ann settled in Sterling Heights, and raised 2 beautiful children. His hobbies included sports, fishing, and gardening. Growing up in Bay City, he never lost his love of the water and could frequently be found wherever he could find a water view, and put a fishing line in the water. Viewing will be held at the Mandziuk & Son Funeral Home, Wednesday March 9th, from 3-8 pm at 3801 18 Mile Road, Sterling Heights. Funeral service will be at St. Anne Catholic Church, Thursday March 10th, instate begins at 9:30 am followed by mass at 10 am, located at 32000 Mound Road, Warren MI. In lieu of flowers, please consider a donation to the American Cancer Society at www.cancer.org or for support of Ukraine (MaryAnn’s family emigrated from Ukraine) at www.unitedhelpukraine.org

The family of James "Jim" Rivard created this Life Tributes page to make it easy to share your memories.

Send flowers to the Rivard family.