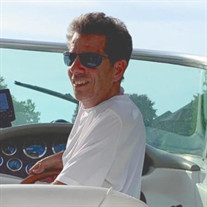 58 years young, passed away suddenly on Friday, November 12, 2021. Jim is survived by his father, James Saad, Sr. (Sandi), his sister Karen, his brother Bryan (Lori), his step-sister Pam (Andy), and his step-brother Pete (Angie), as well as by his nieces & nephews Brianna (Steve), goddaughter Lauren (Stevey), godson Kyle (Christina), Ryan, and Madison. He is also survived by his great nephews & nieces Aidan, Lucas, Ava, and Stevie, by his step-nephews & nieces Drew (Julia), Izzabella, Jacob, Jack, and Erin, and by his godson, Donnie Rospierski. Finally, Jim is survived by many other beloved family-members, friends, and colleagues, and by all of the youth hockey players and hockey families he connected with over his many years of coaching. Jim was predeceased by his mother, Mary Ann, his brother Andy, his brother-in-law Brian, and his beloved dog, Blake. Jim’s family is comforted and humbled by the love and support of everyone who knew and loved him, and by the knowledge that so much of his time on Earth was enriched by his involvement in youth hockey. Jim was an avid supporter and coach of young hockey players in his community, and he especially loved connecting with his players and watching them grow and succeed. His love of the game was something he shared closely with his family. Because of this, we respectfully ask that, in lieu of flowers, anyone who wishes to share their condolences with a gift please do so with a donation, which the family will be placing into a fund to help support first-year hockey players in Macomb County.

The family of James John Saad Jr. created this Life Tributes page to make it easy to share your memories.

Send flowers to the Saad family.