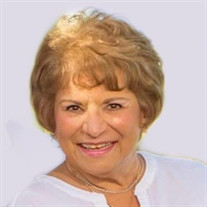 Joan Ann Knapp was born on July 10, 1940, and died at home, peacefully in her sleep, on April 23, 2022. She had, for many valiant years, battled chronic heart disease. She was a devout Catholic, and enjoys already the eternal fruits of her... View Obituary & Service Information

The family of Joan Knapp created this Life Tributes page to make it easy to share your memories.

Send flowers to the Knapp family.