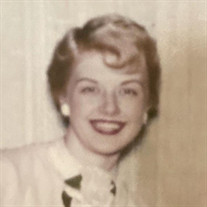 Beloved Loretta Joyce Scheff, born in Detroit on the eighth of August, 1937, died peacefully in her sleep the morning of November 11, 2021, after 84 wonderful years of Earthly life. She leaves behind her cherished husband of over six decades, Eugene Charles Scheff; two sons, Gary (Ann) and Bob (Anne Marie); and a daughter, Sue Hopper (Tom); along with seven grandkids (Katie, Kristin, Frank, Darby, Abby, Ben and Maggie). She is also survived by her brother, Floyd Patasky (Jane). Known her whole life as Joyce, the daughter of Michael and Tillie Anne Patasky would live a storied and steely life, losing both parents by the age of 14. Taken in by “Grandma Z” and “Grandpa Z” (Anna and John Zatkoff), she and her brother, Floyd, were blessed to be welcomed in by cousins Bill, Ritchie, Eadie, Johnny and Carol. Joyce graduated from Detroit Pershing High School and worked for a short stint at a dime store downtown before gaining employment at Chrysler Missile. It was around that time that she met a fresh-faced lad named Gene, who had just returned to Detroit after his service in the United States Navy, at a Polish dance hall in Hamtramck. Joyce and Gene soon married, but that was only the beginning: theirs is a romance that would last over 64 years. Over the years, Joyce would become the loudest Spartan this side of the Red Cedar, fiercely proud to have helped her three children secure the gift of a college education at Michigan State University. She and Gene would, of course, later don the spiritwear of the grandchildren’s various alma maters… but there was never a question: Joyce was a Spartan, through and through, with the coaching advice to boot. Whether it was for watching a game, celebrating a holiday, snack time fun house, or another of the family’s “Scheffests” — she made sure no gathering would occur without her famous Crab Salad and a cheese ball in tow. And, fundamentally, that was Joyce: no number of wise cracks could disguise the warm commitment to family that defined her to her core. Joyce was most well known for being a straight shooter, famously dropping Joyce-isms like “chew, chew, chew,” “the truth will set you free,” “girls are great,” or “don’t be on the muscle.” But she also checked in on everyone’s homework, attended countless sporting events and dance recitals, customized her grocery list for each grandchild’s visit, and brought the family together at Disney World whenever she could. And no birthday was ever really complete until you got the solo birthday song from Grandma Joyce! More than anything else, Joyce loved to be with Gene, whether frequenting the favorite restaurants they would go to together or the numerous trips to the slot machines at MGM Detroit. She loved the family dearly and defended her children at a moment’s notice...even when they didn’t deserve it. She was a hero to all of her grandkids. Joyce was truly one of a kind and will live within our hearts forevermore. In lieu of flowers, donations in Joyce’s name will be used towards the purchase of a commemorative tree to be planted on the campus of Michigan State University. Direct link for donations will be provided shortly. In lieu of flowers, the family requests donations be made to: https://givingto.msu.edu/crowdpower/joyce-scheff-memorial-tree

Beloved Loretta Joyce Scheff, born in Detroit on the eighth of August, 1937, died peacefully in her sleep the morning of November 11, 2021, after 84 wonderful years of Earthly life. She leaves behind her cherished husband of over six decades,... View Obituary & Service Information

The family of Joyce Scheff created this Life Tributes page to make it easy to share your memories.

Beloved Loretta Joyce Scheff, born in Detroit on the eighth of...

Send flowers to the Scheff family.