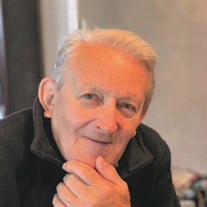 Juraj was born in Yugoslavia in 1929 (modern day Croatia) in a small village called “Brajdic Selo”. To put it in perspective it is like Walton Mountain, where extended families live and work the land together. He grew up as a young teen during the end of World War II and then becoming a young man in post War Europe. Family became the center of his life; whether it was time spent with his mother Mare his grandmother Tonka, who adored little Juraj or his grandfather Franjo who would cover for Juraj when he got in trouble with his father Mica. This love of family and the gift of being a precocious young man was the foundation of his personality–he was curious, funny, daring. The backdrop of a war forged a lifetime of being responsible for others and for his own actions. Being eldest of 10 children, Juraj often became the bread earner for the family. Working as a blacksmith apprentice, any money he made was sent home to take care of his younger siblings. Becoming a well respected craftsman, a Master Blacksmith and business man–his gift of gab, his hammer and his talent to understand people made him a very popular figure in his community and near-by towns. He could often be seen “holding court”; and sharing stories, telling jokes and making a lot of grown men act like silly teenagers. Old and young loved hanging around his blacksmith shop. And if you were lucky enough to drop by the shop or the town pub, you could always have a stiff drink of Sljivovica Plum Brandy. Juraj loved animals and in particular, birds (pigeons), dogs and of course horses. In his later years he loved wildlife animal programs, especially lions and cheetahs. When watching these programs, he would reveal his softer side - he alway had empathy for the prey; the antelope–and was always pleased when they escaped the lions teeth. Juraj immigrated with his family to the USA in 1967 for a better life for his family. He was a hard working and a good-hearted man. His strong sense of loyalty to his family and friends allowed him to rebuild a new life in Detroit, Michigan. Beloved husband of Anna for 63 years. Loving father of Mary Ann (Paul), Lillian (Scott), Damir (Ginny) and David (Lindsay). Cherished grandfather of Sabrina, Miles, and Lola. Dearest brother of many siblings in Croatia, surviving and deceased. Also survived by many nieces and nephews. Juraj lived a long, full life and had touched many people along the way. He will definitely be missed. For family and friends interested in sending flowers, please consider donating to the Hoof and Heart of Southern Michigan horse rescue. Juraj loved his horses and never wanted to see an abused animal. Instead please donate in the name of Juraj “George” Brajdic” and any cash gifts can be sent to Ana Brajdic and they will be donated to the horse rescue. If horses are not your passion please consider an animal rescue close to your heart. Please donate in the name of: Master Blacksmith Juraj “George” Brajdic” Website: https://www.hoofandheartsmi.org Donate: https://www.paypal.com/donate/?cmd=_s-xclick&hosted_button_id=Z52HMMTVRTQA4&source=url&fbclid=IwAR2hiNsndBIDaBvhZEPHdswjp11CHVY2UfsWwASTdgeDIhkptCNNpy_8dMs

Juraj was born in Yugoslavia in 1929 (modern day Croatia) in a small village called &#8220;Brajdic Selo&#8221;. To put it in perspective it is like Walton Mountain, where extended families live and work the land together. He grew up as a young... View Obituary & Service Information

The family of Juraj "George" Brajdic created this Life Tributes page to make it easy to share your memories.

Send flowers to the Brajdic family.