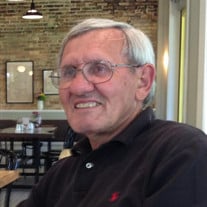 Lawrence (Larry) Piejak of Troy, Michigan passed away peacefully Tuesday, May 25, 2021 at home surrounded by family after a quite remarkable 5 1/2-year period still enjoying life while living with cancer. Larry was born in Detroit, Michigan on November 21, 1942 to Anna (Sugzda) and Casimer “Cass” Piejak. Larry grew up with his younger brothers Tommy and Ronnie on Almont Street in Detroit and as teenagers the three boys worked together at their father's gas station. Larry attended De La Salle High School where he was captain of the swim team. He attended St. Mary's College in Winona, Minnesota, and then Western Michigan University, where he worked as a disc jockey at WIDR and was a member of Sigma Tau Gamma fraternity. Larry graduated college in January, 1965 and married his high-school sweetheart, Lorraine “Lori” Planeta, on August 21, 1965. Larry will be lovingly remembered by Lori as well as his daughter Dr. Lisa Piejak (Jim Prokup) of West Bloomfield, MI; son Lindsay Piejak of Troy, MI; and daughter Linda Mitchell (Kevin) of Andover, MA; grandchildren Greysen Mitchell and Lauryn and Katie Prokup; sister-in-law Diana Piejak (brother Tommy, deceased) of Washington, MI; brother Ronnie and Pat Piejak of Troy, MI; in-laws Carolyn and Bill Schuster of Richmond, MI; step-grandsons Drew Prokup and Evan Prokup (Angella); step-great-granddaughters Florence and Grace Prokup; and many adored nieces and nephews. Larry began his career as a computer programmer at Pontiac Motor Company and then worked as a computer systems analyst for General Motors and Electronic Data Systems. After retirement Larry worked at Meijer, Pine Trace Golf Club, and then at the Troy Suburban Collection Dealership, together again with his brothers Tommy and Ronnie. Larry always kept us laughing with his quick wit, wry observations, and abundance of dad-jokes. While his children were growing up he enjoyed attending all of their school events and band concerts. He also attended their sporting events, such as Lisa’s track meets and Linda’s horse shows, and he also coached Lindsay’s Troy Youth soccer team and assisted coaching his Bonanza travel soccer team and served as team statistician. Larry volunteered for Special Olympics and served on the boards of the Jewish Vocational Service and the Auburn Hills Boys’ and Girls’ Club. He was known for always having a lengthy “to-do” list and checking off items meticulously. He adored his grandchildren and always had a pocketful of fruit snacks and candy for them and they will always remember his hilarious drawings when playing Telestrations. He was perhaps best known for his sparkling clean cars and his impeccably mowed lawn. Many people knew that Larry loved to polka dance with Lori at weddings. Not many people knew that Larry played the accordion pretty well, since he recognized that a gentleman is a man who can play the accordion, but doesn’t. Larry loved his family, his Corvette, Elvis, the Red Wings, and on football Saturdays you could always find him watching the Hurricanes (for Lisa), the Spartans (for Lindsay, Linda, and Kevin), and the Buckeyes (grudgingly and only as a favor to Jim). We will miss hearing the year, make, and model of any single given car at the Woodward Cruise. Larry enjoyed many travels with his family, including the Corvette Museum in Bowling Green KY, Pigeon Forge TN, civil war battlefields in PA, Washington DC, Nag’s Head NC, Charleston SC, New Orleans, Hawaii, Las Vegas and the Hoover Dam, Mt. Rushmore and the Corn Palace in SD, Mystic CT, riding the duck boats in Boston Harbor, and of course, Disneyworld with the grandchildren. He especially loved going on road trips in the Corvette with Lori. Larry and Lori celebrated their golden 50th anniversary in the summer of 2015 with a trip to Boyne Mountain with all of their children and grandchildren, where both Larry and Lori conquered the “Super-G” waterslide. Most of all we will remember the laughter. The family wishes to extend their gratitude to Dr. Kulik, Dr. Nayak and his staff, and Keith Girardot, for their exceptional care. In lieu of traditional services the family has planned a casual celebration of Larry’s life on Thursday, July 8, 2021 from 4-8 pm at Camp Ticonderoga, 5725 Rochester Road, Troy, Michigan, 48085. Please contact Lori, Lisa, Lindsay, or Linda via Facebook for more information. To share a memory of Larry please visit www.mandziukfuneralhome.com. Memorials may be in the form of contributions to De La Salle High School or to the American Cancer Society.

Lawrence (Larry) Piejak of Troy, Michigan passed away peacefully Tuesday, May 25, 2021 at home surrounded by family after a quite remarkable 5 1/2-year period still enjoying life while living with cancer. Larry was born in Detroit, Michigan... View Obituary & Service Information

The family of Lawrence "Larry" Piejak created this Life Tributes page to make it easy to share your memories.