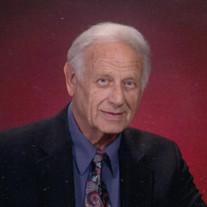 Lawrence "Larry" Skye, age 93, of Sterling Heights, passed into the arms of his Savior on Friday, May 7, 2022. He is survived by his devoted wife of nearly 10 years, Frances Boase Skye and a loving brother, Gordon Skye. He is preceded in death by his parents, Walter and Minnie Skye, Margaret Hobert Skye, Cheri Wills Skye, his ex-wife and mother of his children, Dolores Drake Skye and step sons, Donald Boase and George Boase. Larry was blessed to raise four children with his wife, Dolores, during their twenty-seven year marriage. They are David (June) Skye, Kathy Skye, Carolyn (Jennifer) Skye, and Rand Skye who all survive him. He was married to his late wife, Marge, for twenty-two years and was step-father to Val (Jim) McLerran, Terry Hobert, Doug Hobert and Susan Cohee who all survive him. His marriage to Frances in 2012 made him step-father to Ron (Vicki) Boase, Karyn Boase and Deborah Boase, who all survive him. He was also married for seven years to his late wife Cheri and was step-father to Greg (Sheryl) Wills, Steve (Julie) Wills and Robyn (Richard) Green who all survive him. Larry is also survived by many grandchildren and great grandchildren. Larry was born in Hoquiam, Washington to Walter and Minnie Skye on April 22, 1929. After graduating high school, he served in the Naval Reserves. For several years, he worked in California for Edison Power followed by his work in Washington with Puget Power, State Farm Insurance and worked many years as a Tax Assessor for the State of Washington until his retirement. Larry surrendered his life to Jesus Christ in his teen years and was actively involved with church life and many capacities throughout his life. He was always active and athletic, especially loving the water, hiking, gardening, and camping. He also loved music and dancing. A competitive swimmer in high school, he loved the ocean and teaching his kids to swim in the surf of California and in Washington. One of his joys was taking his family on trips to Knotts Berry Farm when they were young. He enjoyed watching sports, but especially football games. The family will greet friends at Mandziuk & Son Funeral Directors of Sterling Heights on Saturday, May 21, 2022. Visitation at 11:00am, followed by his memorial service at 1:00pm at the funeral home.

Lawrence "Larry" Skye, age 93, of Sterling Heights, passed into the arms of his Savior on Friday, May 7, 2022. He is survived by his devoted wife of nearly 10 years, Frances Boase Skye and a loving brother, Gordon Skye. He is preceded in death... View Obituary & Service Information

The family of Lawrence "Larry" Skye created this Life Tributes page to make it easy to share your memories.

Send flowers to the Skye family.