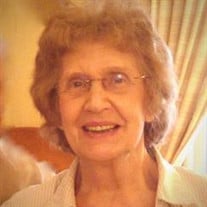 On the morning of April 23, Lenore Alma Gessert of Clinton Township passed away peacefully at home at the age of 90. Lenore was born in Detroit, Michigan, on January 17, 1930. The first important event of her life occurred when she was 12 years old. That was when she learned of Jesus and how much He loved her. She was devoted to Him for the rest of her life. In fact, anyone who knows Lenore and how much she loves Jesus can only imagine what it must have been like for her, at the moment she left her earthly body, to see Jesus for real for the first time. Lenore went to public school until tenth grade when she was given a scholarship to attend eleventh and twelfth grades at Concordia Teachers College, River Forest, Illinois. She wanted to be a teacher; however, she had to go back home to earn money for a couple years before she could continue her education. She got a job as a telephone operator at the telephone company, also known then affectionately as “Ma Bell.” Her kids thought it was so funny when she would imitate how she had to pronounce numbers so that people wouldn’t get the numbers 5 and 9 mixed up. She’d say, “We were told to say, “NI-yun” for 9, so that no one would think we said 5.” And then she’d make up a number with a bunch of 9’s in it and say in her nasal ‘telephone operator’ voice, “Sir, that number is seven, three, five, NI-yun, NI-yun, NI-yun, NI-yun.” (It was a lot funnier to little kids than it is now to read this!) She returned to Concordia for college in the fall of 1949, but it was in February of 1951 that the second important event of her life occurred. It was there that she met the handsome young man who would become her husband, August Gessert, Jr. This is how she related the story in a letter to her daughter: I went to a gathering in the auditorium and saw your dad go up on the platform for the judging of a contest at the college for the best mustache and sideburns. Your dad won. Next, there was a “reverse party” in a couple of weeks where the girls asked the boys for a date, and I asked Augie Gessert for a date. But he had been invited to the reverse party already by three girls from the girls’ dorm who had invited three guys from the boys’ dorm. So he sent me an invitation to go on a date with him the next Saturday to see the movie, Kontiki. After our date, he came over to the girls’ dorm to play Ping-Pong with me. She said, “When I saw your dad standing up there on the platform, I thought, ‘Wow, there’s a good-looking fellow!’” And, as Augie several times told his kids, “When I saw your mother, I thought she was the most beautiful woman I’d ever seen.” As the saying goes, “He was a goner the moment he saw her.” Augie and Lenore were married six months later. On their first day of married life, they went into town to buy an ironing board! The first meal Lenore cooked for them was spaghetti and meat sauce in an electric roaster. Their little apartment didn’t have a stove or a refrigerator. Every day Augie would stop on the way home from work to buy ice for the ice chest they used instead. The third important event happened in May of 1953 when Lenore became a mother upon the birth of their first child, Lisa. She was followed by Carol in 1954, August in 1956, and Judy in 1960. Those are the three great loves of her life - Jesus, her husband, and her family. Her highest goal in life was to make sure that her children, grandchildren, and great-grandchildren knew Jesus like she knew Jesus - as forgiving Lord and beloved Savior. To that end, she and Augie faithfully taught their children and grandchildren about God and His love for them. The life they lived of faith, devotion, and trust in God in the midst of difficult trials shall remain as an encouraging and guiding force for all their loved ones. Lenore and Augie have four children, twelve grandchildren, and nine great-grandchildren. Lenore was preceded in death by daughter, Lisa Hunter, and grandchildren, Shannon Gessert, August Gessert IV, and Michael Bongiorno. She is survived by her loving husband of more than 68 years, August Gessert, Jr.; children, Carol Tepker, August Gessert III, and Judy Bongiorno; sons-in-law, Ronald Hunter, Paul Tepker, and Charles Bongiorno; grandchildren, Julie Hunter, Mychal Tepker, Jaimee Tepker, Rachel Gessert Milam, Anastasia Gessert, Jorian Gessert, Isaiah Gessert, Stephen Bongiorno, and David Bongiorno; great-grandchildren, Kalli Morrissey, Jayden Morrissey, Evelyn Morrissey, Anders Milam, Valentine Milam, Ripley Milam, Nathan Bongiorno, Emmy Bongiorno, and Matteo Bongiorno; sister, Elaine Smith; and many nieces and nephews. A private graveside service will be held at 10:00 a.m. on Monday, April 27th, at Resurrection Cemetery in Clinton Township. In closing, the following song possibly captures Lenore’s first moments of her eternal life: I Can Only Imagine by MercyMe I can only imagine what it will be like When I walk by Your side. I can only imagine what my eyes will see When Your face is before me. I can only imagine. Surrounded by Your glory, What will my heart feel? Will I dance for You, Jesus? Or in awe of You be still? Will I stand in Your presence Or to my knees will I fall? Will I sing, “Hallelujah?” Will I be able to speak at all? I can only imagine; I can only imagine. I can only imagine when that day comes, And I find myself standing in the sun; I can only imagine when all I will do Is forever, forever worship You. I can only imagine; I can only imagine.

On the morning of April 23, Lenore Alma Gessert of Clinton Township passed away peacefully at home at the age of 90. Lenore was born in Detroit, Michigan, on January 17, 1930. The first important event of her life occurred when she was 12... View Obituary & Service Information

The family of Lenore Alma Gessert created this Life Tributes page to make it easy to share your memories.

On the morning of April 23, Lenore Alma Gessert of Clinton Township...

Send flowers to the Gessert family.