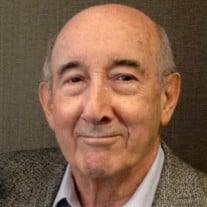 Leonard “Len” Noel Coudurier, age 92 of Sterling Heights, Michigan, peacefully passed away at his residence on March 20, 2020 under the care of Henry Ford Hospice. Beloved husband for 55 years of the late Antonia “Tonny”. Loving father of Stephen (Diane) and Richard (Julie). Dear brother of Mary Brant, Doreen Garniss, Patricia Haben, Yvonne, and Suzanne (deceased). Cherished Grandfather “Opa” to Isaac (Navreena), Elle, Ryan, and Mitchell and Great Grandfather to Hadasah and Jackson. Born on July 8, 1927 in Harrow, England, Len originally worked as a cabinet maker and served in the Royal Air Force. In 1955 he immigrated to St. Catharines, Ontario, Canada with his newlywed wife in seek of new career opportunities. Len trained and worked in the automotive tool and die industry initially in Windsor, Canada and ultimately moved to the Detroit area where he worked for 18 years at Delta Tooling, Inc. He later started his own small business, Laserpoint, Inc., providing a variety of laser engraving services until his retirement in 2004. During his retirement, Len and Tonny enjoyed traveling all over the world and going on numerous cruises with friends and family. Len was known for being an extremely sociable person and loved sharing stories and meeting new people. Later in his retirement years, Len volunteered his time driving seniors to medical appointments and shopping needs. Len also gave generously to several charitable organizations. A celebration of Len’s life will be arranged at a date to be determined.

The family of Leonard N. Coudurier created this Life Tributes page to make it easy to share your memories.

Send flowers to the Coudurier family.