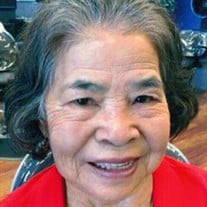 Liane Sophabmisay was born in Sam Neua, Laos on April 6, 1935. She joined her loving husband in Heaven on January 18, 2022. She was a longtime resident of Hartland, Michigan and has lived in Akron, Ohio and Milford, Michigan. A loving mother, grand-mother, and great grand-mother. During her lifetime, she was an entrepreneur, farmer, traditional/herbal healer, and was considered a spiritual elder in many of her previous Lao communities. Over the years she welcomed many strangers into her family and was considered by many as their mother, aunt, sister, and spiritual mentor. Her legacy will live on in the hearts and minds of everyone she interacted with. Liane had an unwavering faith in Buddhism but also had respects for other beliefs and faiths. Over the years, she has worshiped at various Buddhist monasteries and at the Milford Lutheran church. She passed her faith on to her children and grandchildren. Liane was predeceased by her loving husband of 50+ years, Ninhom Sophabmisay. Liane is survived by her oldest son Sitthisone (Sid) and his wife Douangchanh (Jan), son Somsanit (Mike) and wife Marlene, daughter Thongsavane (Nang) Phanhthalath and husband Khamkhong (Kham), son Kampou Sophabmisay and wife Merit. She is also survived by 17 grandchildren Alompradith (Ole) Sphabmixay, Tony Sphabmixay, Jonathon Sphabmixay, Ozzy Sipraseuth, Hatsady McCormick, Settha Sophabmixay, Kanha Collins, Khong Sophabmixay, Eddie Sophabmisay, Danny Sophabmisay, Alex Sophabmisay, Kristina Phanhthalath, Michael Phanhthalath, Emily Phanhthalath, Christian Sitterlet, and Belle Sophabmisay, and Ariel Sophabmisay. She had 13 great-grandchildren. In recent years she lived and was cared for by her children and grandchildren. She was especially thankful for her daughter-in-laws Jan, Marlene, Merit and her son-in-law Kham for their extra care and love. The family gives everyone else who expressed their love for her their greatest gratitude. The family will receive friends and celebrate her life on Saturday, January 29, 2022, between 12:00 – 3:00 PM at E.J. Mandziuk and Son Funeral Home 3801 18 Mile Road, Sterling Heights, MI.

Liane Sophabmisay was born in Sam Neua, Laos on April 6, 1935. She joined her loving husband in Heaven on January 18, 2022. She was a longtime resident of Hartland, Michigan and has lived in Akron, Ohio and Milford, Michigan. A loving mother,... View Obituary & Service Information

The family of Liane Sophabmisay created this Life Tributes page to make it easy to share your memories.

Send flowers to the Sophabmisay family.