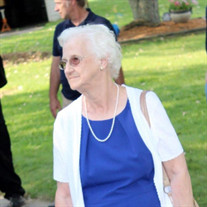 Mabel Clara (Krajniak) Wrobel January 9, 1933 to May 15, 2020 Mabel was born and raised in Posen, Michigan by Frank and Clara (Woida) Krajniak. She met the love of her life Ernest in January 1951 and they were then married a short time later on August 25th. They moved to Warren and started their family, where she resided in Warren until her death. She was always proud of her home and family. Mabel was ahead of her time. She taught her sons to cook. She placed an emphasize on her daughters education so that “ you never need a man to take care of you.” She was a fierce defender of her children and grandchildren. Even though she worked outside the home for years, her family was her number one priority always. She always had time to rock a baby, hug a child, or teach them to climb. She was always able to fix anything from a fever to a broken heart. It was never to early or to late when her children or grandchildren needed her. Mabel loved all children. Her nieces and nephews became her second children. She always had room for one, two or three more. Her relationships the her “other” kids was strong through her whole life. As was her faith in God. She enjoyed her gardening and baking (her oatmeal cake and jellies are legendary). She loved all small creatures, especially butterflies. (She even befriend a small skunk as a child), She was devoted to her brother and sisters, whether by birth or marriage. They were her most important allies (while managing her hectic family), her card partners, her casino partners and a great source of support. Mabel was strong as she was caring. She battled breast cancer with dignity and grace. She never complained, instead she took what life threw at her and forged forward. She is survived by her beloved husband Ernest, Her children Ronald & Linda Wrobel, David Wrobel, Timothy Wrobel, Randy & Debbie Wrobel, John Wrobel, Colleen Goslow, and Kathleen & Howard Erlich. Her grandchildren Morgan & Yuvonne, Dayna, Jessica, Adam, Jennifer & Colton, and Nicholas. Her brother, Dominic Krajniak and sister (and sister-in-laws) Mary Goyette, Martina Flaga, Dothothy Krajniak, Hazel Krajniak, Pat Krajniak, Bonnie Krajniak Delores Wrobel, and Janet Krajniak. And her great children Will, Addsyn, Warner, Colton, Blake, Cyle, Lillian and Abigail. She is preceeded in death by her parents Frank & Clara (Woida) and John & Albena (Rutkowski) Wrobel, her son Donald Wrobel, grandson Kurtis Wrobel, her siblings Ray & Edna Szymanski, Ervin Krajniak, Norbie Krajniak, Gail and Chip Askinen, Isabelle &Tony Krajniak, Sam and Barbara (Rita) Haggar, Valentine (Bill) Krajniak, Clarence Krajniak, Bernadine Krajniak, Lee Goyette, William & Virgina Wrobel, Kenneth Wrobel, Charlie & Francine Wrobel, Ralph & Angie Wrobel, and Eugene & Marie Kapala.

Mabel Clara (Krajniak) Wrobel January 9, 1933 to May 15, 2020 Mabel was born and raised in Posen, Michigan by Frank and Clara (Woida) Krajniak. She met the love of her life Ernest in January 1951 and they were then married a short time later... View Obituary & Service Information

The family of Mabel Clara Wrobel created this Life Tributes page to make it easy to share your memories.

Send flowers to the Wrobel family.