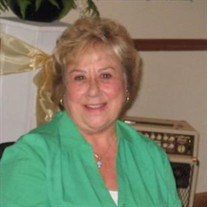 The world lost a beloved wife, mother, and grandmother on January 1, 2022, of a sudden stroke. Mary, 77, is survived by her husband Richard; daughter’s Dawn and Deborah; her son-in-law’s Ron Avenida and Todd Corbin; five grandchildren, and her younger brothers Johnny and Lonnie Tucker. Mary was devoted to her family, and her grandchildren were the apple of her eye. She loved to travel and never missed her grandkids’ many events. She was always the loudest whistler in the crowd. Mary was born on December 4, 1944, to Dick and Bonnie (Bartlett) Tucker in Morrilton, Arkansas. Her family moved to Michigan when she was five years old. Mary and Richard met at Southeastern High School in Detroit during their junior year and were married in 1965 when Richard was in the Marine Corp. They lived in Cherry Point, North Carolina during his military years and returned to Michigan to start a family. In December of 1987, while working at Wayne State University, she was struck with Guillain-Barre Syndrome. GBS is a neurological condition in which the immune system attacks the nerves. She was in the hospital for 3 months followed by 2 ½ years of rehabilitation. She was a fighter and learned to walk again. She was in constant pain, but she never complained. Some of Mary’s fondest memories are from the 27 years of vacationing in Myrtle Beach with her girlfriends, the Hot Tub Club, which was followed by a week's vacation with couples. They shared many laughs, but “What Happened in Myrtle Beach stayed in Myrtle Beach.” To her five grandchildren, Rylee (21); Christopher (20); Elliot (19); Quinn (17), and Asher (15) she is their “Beba”. She was there when each of them was born and went to all their special events. She enjoyed taking them to Disney World and Cedar Point and would ride the roller coasters with them. In lieu of flowers, donations can be made to either Guillain-Barre Research or St. Jane Frances de Chantel Catholic Church which has been their parish for over 36 years. Guillain-Barre Foundation: http://www.gbs-cidp.org/donate/ St. Jane Frances de Chantel: 38750 Ryan Rd., Sterling Heights, MI 48310-2985

The world lost a beloved wife, mother, and grandmother on January 1, 2022, of a sudden stroke. Mary, 77, is survived by her husband Richard; daughter&#8217;s Dawn and Deborah; her son-in-law&#8217;s Ron Avenida and Todd Corbin; five grandchildren,... View Obituary & Service Information

The family of Mary Weiler created this Life Tributes page to make it easy to share your memories.

The world lost a beloved wife, mother, and grandmother on January...

Send flowers to the Weiler family.