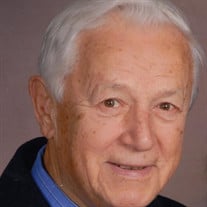 Michael Komic age 96 Born in Stapar, Yugoslavia. His parents Milan and Dora immigrated to the U.S. when he was 13 years old. He was an Army veteran of World War II, serving as a technical sergeant in Italy and North Africa. His parents sent him to tailoring school to help with his father's tailoring and dry-cleaning business in Detroit. After his father's death, Mike took over the business and ran it successfully until his retirement in 1988. Mike was a New York Yankees baseball fan. He liked to tease his son-in-laws and friends about how much better the Yankees were than the Detroit Tigers. He had a welcoming smile and a zest for living. He was married to his wife Alice for 54 years. Together they raised three daughters, Sally, Melanie and Dorie, and helped raise their granddaughter, Valerie. Devoted to his family and his church, he constantly gave of himself to others. He was generous and always willing to lend a helping hand, whether tailoring clothes for family and friends, baby-sitting grandchildren, helping with yard work and chores around the house or cooking for family and friends. He enjoyed sharing what he cooked with his family, pastor and friends. He was loyal, dependable and always on time. Mike led by example and was a man of his word. He was active in his church as an usher and clerk and loved to serve his pastors. Called by his doctors "The Iron Man" he passed away on Saturday June 6, 2020. He leaves to cherish his memory his children, Sally Costa, Melanie (Daniel) Teahan, Dorie (Greg) Cummings, his grandchildren Valerie (Keith) Sobus, Alyssa (Thomas) Loy, Aaron Cummings, Andy, Kelly and Ryan Teahan. Great grandchildren Jude, Shepherd and Abel Sobus. Nephews Steven and Nick Komic, nieces in Serbia, Mirjana, Ljiljana, Svetlana and other great nieces and nephews. Memorial contributions to Christian Church For All Nations in Warren, would be appreciated.

Michael Komic age 96 Born in Stapar, Yugoslavia. His parents Milan and Dora immigrated to the U.S. when he was 13 years old. He was an Army veteran of World War II, serving as a technical sergeant in Italy and North Africa. His parents sent... View Obituary & Service Information

The family of Michael Komic created this Life Tributes page to make it easy to share your memories.

Send flowers to the Komic family.