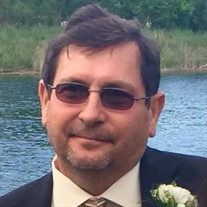 Age 58 Beloved husband of Elzbieta. Loving father of Zachary, Emily, Katie, Brian Zuchora, Ewa Pucilowska, Kasia (Krzysztof) Wirkowski. Cherished grandfather of Cameron, Levi, Przemek Wirkowski, Kornelia Wirkowski, and Alivia McSwain. Dearest brother of the late Stanley (Mary), Mary (the late Henry) Brodzinski, Anthony (the late Donna), Marcel, Margaret (Robert) Cooks, Laura (Dennis) Werthman. Treasured by many nieces, nephews and cousins. Preceded in death by his parents Marian and Helena. Mitchell immigrated from Poland in 1968 at the age of five with his mother, Helena and his six siblings to join his father, Marian in America. He finished schooling and became an electrician, which is a profession he served in for most of his life; his most recent career at Faurecia beginning in 2007. With a love for nature, he enjoyed hunting, fishing and camping in Romeo, Michigan; spending quality time with his children, sharing his passion for the outdoors. Adventurous, helpful, wise, creative and cooking an amazing barbecue are some of his cherished qualities that will be missed by so many. Always putting his family first and providing for them, being a phenomenal husband, father and grandfather was what he was most proud of. Mitchell was a strong man, always wearing a smile until the end, taking his illness with grace. He will be missed by his adoring family and his many friends.

The family of Mitchell Zielonka created this Life Tributes page to make it easy to share your memories.

Send flowers to the Zielonka family.