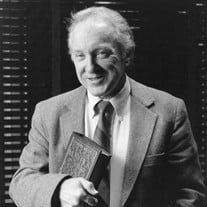 Nigel Hampton, 86 December 19, 1934 – January 1, 2021 Nigel Hampton, 86, died peacefully in his sleep in Sterling Heights, MI, on January 1, 2021. Born on December 19, 1934, in LaFayette, Georgia, Nigel was the son of Andrew Madison and Ellen (Bobbi) Hampton. Raised largely in Georgia and Tennessee, Nigel graduated from Hueytown High School in Alabama and from Livingston (Alabama) State Teachers College (now the University of West Alabama) with a Bachelor of Arts in English. After briefly teaching 10th-grade American history in Birmingham, Alabama, and serving in the army in Germany, Nigel worked for the International Chemical Workers Union Council (ICWUC) for five years in Akron, Ohio, as an organizer and later as Director of Public Relations while simultaneously pursuing interests in journalism and photography. Returning to school at the University of Connecticut, he earned his Master of Arts and Doctor of Philosophy, both in English. In 1969, Nigel joined the English Department of Oakland University, then a branch of Michigan State University, in Rochester, Michigan, where he taught journalism and American literature for 30 years. His popularity as a teacher was officially recognized in 1984 when, as Associate Professor of English and Journalism, he was awarded the Oakland University Teaching Excellence Award. In addition to his teaching duties, Nigel organized the first teachers union for collective bargaining at the university level in the United States in 1970 through the American Association of University Professors. Nigel’s early career as journalist and photographer often put him in the midst of historical events, most notably the Civil Rights Movement of the 1960s. Writing under pseudonyms to protect his parents, Nigel covered the Freedom Riders’ arrival in Birmingham, Alabama, and interviewed many leaders in the Movement, including Martin Luther King Jr, Stokely Carmichael, Andrew Young, Walter Reuther, John Lewis, and John Salter. At Salter’s invitation and under constant surveillance by local Ku Klux Klansman, Nigel addressed the Northeastern North Carolina Black Belt Voter Registration Conference in 1965 regarding organizing the registration drive. Representing the ICWUC at the White House, Nigel interacted with the Kennedy family (John, Robert, Edward, and Jacqueline) as well as with Lyndon Johnson as both Vice President and President and with Hubert Humphrey; he received a private tour of the building’s restoration from the First Lady. In the previous decade, Nigel guided ethnomusicologist Alan Lomax around central Alabama, locating regional folk musicians for Lomax to record, and also covered Johnny Cash’s early concert career in Alabama and Illinois. Nigel’s favorite authors included William Blake, Herman Melville, and Henry David Thoreau. His other interests included photography, genealogy, cinema, and folk music; he was also an avid guitarist. Nigel leaves his wife, Anna Hampton of Romeo, MI; daughter, Carol Hampton of Norwalk, CT; son and daughter-in-law, David and Mary Hampton of Fayetteville, NC; son, Reed Hampton of Romeo, MI; and two granddaughters, Sabrina Hampton of Lake Orion, MI, and Katherine Hampton of Fayetteville, NC. Due to COVID-19 restrictions, a memorial service for Nigel will be postponed until later this year. Inquiries may be directed to Carol Hampton at [email protected]

The family of Nigel Hampton created this Life Tributes page to make it easy to share your memories.

Send flowers to the Hampton family.