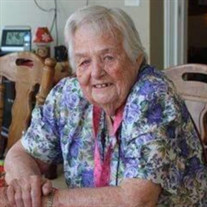 Ota Mae Brendle grew up in Piggott, Arkansas where she lived on the farm with her parents and 8 brothers and sister. She Married Earl Dickerson on Nov 21, 1942. They moved to Michigan where they raised their two children Raymond and Lola. Ota Mae worked in the factories on the Assembly lines in Detroit. She re-married in 1980 to Huel Brendle, where they resided in Warren. She was preceded in Death by her parents Curtis and “Molly” Book, Siblings Naomi Ruth, Lowell, “Dee”, Amos, Homer, Adell, Otis, and Mary, Both Husbands Earl Dickerson (1974) and Huel Brendle (2010), and by her Beloved Son “Ray”(2011). Ota Mae is survived by Daughter Lola (Norman) Hoenighausen, Daughter-in-law Nancy Dickerson, 5 Grandchildren Heather (William) Crowley, David (Chris) Ponsart, Matthew Dickerson, Christina (Jason) Stogner, Jackie (Brian) Mulvaine, and 5 Great Grandchildren Kylan Hounsell, Kendra Hounsell, Jaelen Hounsell, Aiden Mulvaine, and Rebecca Mulvaine. Ota Mae enjoyed the simple things in life. She spent countless hours singing at Church in Choir, Quartets and at any “singin” service there were. She also taught Bible School and cleaned the church. She enjoyed Fishing, Quilting, needlework, sitting on the porch talking with family and friends. Or anyone that decided to stop and sit a while. She visited family in other states as often as she could. She and Huel spent many winters in Florida, where she would meet her twin brother to spend their birthday together. She also enjoyed cooking and baking too. Anyone that has been to Ota Mae’s house has had her legendary Fried Chicken and if you were lucky, one of those famous Fried Apricot Pies, making sure no one left hungry. Many memories were made or shared around the table. Over a meal, playing cards or her favorite Dominoes. Ota Mae only needed to be with you. However, she spent that time with you did not matter to her. This often meant running errands, sitting on long car rides, anything to be with you a little longer. She loved Hard and everyone felt it. If you told her I love, she often returned with and argument of “I Love you more” or more recently “I love you too, so your loves not wasted.” That really is her legacy, sharing the Love God gave her, and never wasting it. A private memorial service will be held December 30th at Royal Oak General Baptist Church.

Ota Mae Brendle grew up in Piggott, Arkansas where she lived on the farm with her parents and 8 brothers and sister. She Married Earl Dickerson on Nov 21, 1942. They moved to Michigan where they raised their two children Raymond and Lola.... View Obituary & Service Information

The family of Ota Mae Brendle created this Life Tributes page to make it easy to share your memories.

Ota Mae Brendle grew up in Piggott, Arkansas where she lived...

Send flowers to the Brendle family.