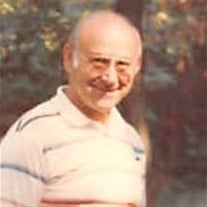 Paul’s life was defined by his strong faith in God. The Holy Spirit was in everything he did, the life choices he made, and the people he chose to share his life with. One could even say that he had a wonderful life because his path was illuminated by following his faith. He was born in Detroit on March 5, 1930 while his parents were visiting America during difficult economic times. After his Father found work, the rest of the family could not remain in America, so went back to Slovakia as an infant where he was raised Catholic and a proud Slovak with his Mother, Stefania, older brother and two sisters. When Paul was a young man, his path took him back to America to start a new life as an American citizen. He served his new nation as a soldier during the Korean War. He learned English and became a skilled tradesman in woodwork and model making and this helped him begin his 39-year career at General Motors. His faithful path took him to St. Nicholas Church, where he met the love of his life, a “good Slovak girl” named Anna Dorich; later he would affectionately call her “Anička Moja” which means “My Anna”. They married and raised two children, Stefanie (Gervais) and Michael. His family grew when Stefanie married son-in-law, Robert Gervais, and gave him beautiful grandchildren, Nicole, Alexander, Andrew, and Brittany, who also married Peter White. The family grew more when Michael married daughter-in-law, Jeanette Lincoln and gave him another grandchild, Aiden. Paul will forever be remembered as a loving husband, father, and grandfather. Beyond his love for his own family, Paul also loved his church family. He was deeply involved with his church, St. Cyril & Methodius, not only as a parishioner but eventually as a church elder. In fact, he even set the cornerstone for the new church building when the parish moved from Detroit to Sterling Heights. His life was such a wonderful one that he fought on to live through severe illnesses far beyond most people, reaching almost 90 years old. His strength to fight came from his faith, but near the end of this long life, came from a determination to stay with his Anna, his “Anička Moja”. Paul thanked God every day for helping him choose the path that gave him such a wonderful life and we know that his faithful path led him back to God.

Paul&#8217;s life was defined by his strong faith in God. The Holy Spirit was in everything he did, the life choices he made, and the people he chose to share his life with. One could even say that he had a wonderful life because his path was... View Obituary & Service Information

The family of Paul Magusin Jr. created this Life Tributes page to make it easy to share your memories.

Paul’s life was defined by his strong faith in God. The Holy...

Send flowers to the Magusin family.