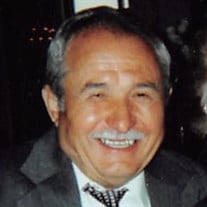 Beloved husband of Vesa for 62 years. Loving father of Milka “Mimi” (the late Danail) Liptov, Lence “Helen” (Goce) Zarovski. Cherished grandfather of Jessica Beeman, Gabriela (Chris) Velkovska, Marisa (Joe) Primavera, Andriana (Milan) Topolovic, Spiro Petre Zarovski, and Dylan Liptov. Treasured great-grandfather Jack, Cruz, Michael, Chloe and Tessa. Dearest brother of Vancho (Cveta) Jaikovski, Josif Jaikovski, Risto Jaikovski, and the late Nikolina Popovska. Survived by many nieces, nephews, and cousins. Petre Jaikovski was born in the village of Brajcino, Prespa, Kingdom of Yugoslavia on July 1st, 1934. He was the second-born child to Boris and Cveta Jaikovski. Sharing a happy and carefree childhood with his siblings, sister Nikolina, brothers Josif, Vancho, and Risto, he was the jokester of the family. In 1958, he married his childhood love Vesa Mackovska and started their married life in Titov Veles where they had their first daughter, Milka. In 1962, they built their first home in Bitola, where their second daughter Lence was born. In 1970, Petre grew restless and decided to make his way to Canada with his family. After a brief time in Toronto, his ambitious personality guided him to America. Petre and his family joined his brother Vancho in Chicago in the late 1970s. In 1977, they moved to Centerline, Michigan, looking to preserve their Macedonian culture and traditions with the large Macedonian community in the Metro Detroit area. Hard work, dedication, perseverance......all while having a fun and enjoying life....are all attributes that Petre had in abundance. His life was filled with personal blessing to professional accomplishments, always striving to do more for his family. In his retirement years he spent his time enjoying his family, grandchildren and great-grandchildren. He was a master gardener, inventor and storyteller. He was part of the McDonalds retirement club and a savvy shopper at Meijer, Kroger and Vince and Joe’s. He will be eternally missed by his wife, his daughters and his entire family! The void his passing left in our hearts can never be filled by anything but we are grateful to God for our precious memories.

The family of Petre Jaikovski created this Life Tributes page to make it easy to share your memories.

Beloved husband of Vesa for 62 years.
Loving father of Milka...

Send flowers to the Jaikovski family.