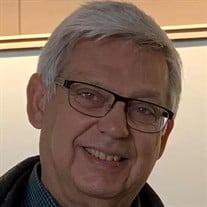 Ralph Siegbert Kilp was born on November 3, 1950, in Friedberg, Germany, the second son of Werner and Marta Kilp. His older brother, Harold, was born in 1947. Two younger sisters joined the family - Eleanor in 1955 and Angie in 1962. In 1952 the family left Germany and sailed to America, arriving in Detroit and subsequently living in the suburb of Warren, Michigan, where the family lived during his childhood and teenage years. Living a Christian life was the cornerstone of the Kilp family, worshipping with fellow believers at the Church of God. So it was that already as a child Ralph too made the Lord his master and trusted in His guidance for his entire life. Music was highly valued in his family, and early on Ralph showed musical talent, learning to play the piano and subsequently the violin, playing for a short while in the St. Clair Orchestra. He was blessed with a rich baritone voice and singing became his ultimate joy. He sang in church and school choirs during his teenage years and at the age of 16 became the director of the church choir. This he did for over 50 years. He sang many a solo for weddings and funerals in his friendship circle. He briefly attended college at Lawrence Tech, simultaneously working part-time for John V. Carr, a customs brokerage firm, ultimately working full-time, learning business and becoming a licensed customs broker, retiring from Delph in 2017. In 1969, at the age of 18, a girl named Trudy captured his heart, leading to a 4-year courtship, and in 1973 Ralph and Trudy for married in Winnipeg, Manitoba. Together they walked and shared the joys and sorrows of life for 48 years. In 1987 the precious gift of a son, Nathan, was given to them. Ralph and Trudy enjoyed traveling, and did so frequently - to Canada to visit family. exploring much of the United States. and well as countries overseas. Ralph enjoyed an active retirement, which sadly came to a sudden halt on December 10, 2021, when he tested positive for Covid. Prayers were sent heavenward by hundreds of believers for his recovery, but the Lord, in His wisdom, called him to his heavenly home on January 14, 2022. Mourning his passing is his beloved wife, Trudy, and son, Nathan; his treasured siblings - brother Harold (Erika), sisters Eleanor (John) and Angie; numerous brother-and sisters-in-law, nephews and nieces, aunts and uncles, cousins; a grieving church family at Hope Crossing, and a large circle of friends. "MOST ASSUREDLY I SAY TO YOU, HE WHO BELIEVES IN ME HAS EVERLASTING LIFE." JOHN 6:47 In honor Ralph's memory, in lieu of flowers donations can be made to Hope crossing, to be gifted to charities that were dear to his heart.

Ralph Siegbert Kilp was born on November 3, 1950, in Friedberg, Germany, the second son of Werner and Marta Kilp. His older brother, Harold, was born in 1947. Two younger sisters joined the family - Eleanor in 1955 and Angie in 1962. In 1952... View Obituary & Service Information

The family of Ralph Siegbert Kilp created this Life Tributes page to make it easy to share your memories.

Send flowers to the Kilp family.