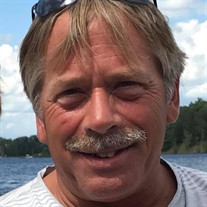 Richard Ward, 59, of Sterling Heights, Michigan Beloved husband and best friend to Judy, his wife of 32 years. Devoted father to Taylor and Justin and the late Shelby. Brother to Christine Ward, Steven (Beverly) Ward, and Robert (Patty) Ward, brother-in-law to David (Virginia) Fett and Debbie (Chris) Truman, son of Richard Ward (Patricia) and the late Mary C. Ward. Favorite son-in-law to Maxine M. Fett and David A. Fett. Survived by many nieces, nephews, cousins and his Aunt Judy. Rich was a graduate of George A. Dondero High School in Royal Oak. He started his career as a draftsman in the automotive industry right out of high school and eventually wound up as a Draftsman Supervisor at Troy Design and Manufacturing in Plymouth. He was respected and admired by his co-workers and was considered one of the greatest bosses that his employees had and could look up to. Rich was known as a hard worker and was exceptional at grinding out solutions for difficult timing and engineering problems. He always found a way to success. Rich loved spending time at their cottage on Sage Lake. Rich loved his time there even if it was just sitting on the boat having a beer. Favorite memories were driving the jet ski to the local lakeside dining, having a cocktail and watching the action on the lake. He loved the atmosphere, the community and enjoying quality time with his family. Rich loved cars. You could always find him at the Woodward Dream Cruise in August. He never had the chance to own a “hot rod” once we started a family but it was always one of his dreams. He loved working on cars. His family could always depend on him when a sensor light came on, a noise popped up out of nowhere and even when someone got into a fender bender and needed the work done. Everyone could count on Rich for their mechanical needs. Rich’s generosity of his time, talents and friendship were never left unnoticed. Rich will be remembered as someone who was loving, kind, sweet, a great family man, risk taker, encourager, and a good sense of humor. He would say things just to get a reaction out of someone, the family would tease that he was a “pot stirrer”. Rich was known as the person who would be quick to find the humor in things. He opened his home to anyone and took pride that whoever visited shared in his comfort that his home was a place that people felt like family. Per Rich’s request there will be no public funeral but a private burial at Oakview Cemetery in Royal Oak. In lieu of flowers, donations can be made to the family, charity of their choice or the Epilepsy Foundation of Michigan

The family of Richard Ward created this Life Tributes page to make it easy to share your memories.

Send flowers to the Ward family.