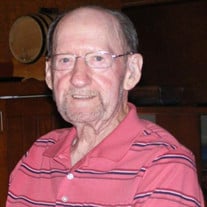 Robert L Alexander of Chesterfield Township died December 4, 2020 at the age of 86. Bob is survived by his daughters Brenda (Gary Sr) Lippard and Peggy (Paul) Bailey; grandchildren Gary Jr, Robert, Nicholas Lippard, Stuart and Rebecca Bailey, and Devin Kuhfal; his sister-in-law Mary Alexander; his dog, Bella; and many nieces and nephews. He is also survived by his extended family Daniel (Michele) Kukawski; Renee (David) Wilcox; Michael (Michelle) Kukawski; Ashley (Chad) Blake; Jonathan, Matthew, Kyle, Madison, and Aiden Kukawski; Christopher Wilcox; and Emma Blake. He was predeceased by his wife, Donna, his daughter, Carolyn, his parents, and his siblings, “Kay” Jackson, “Sue” (“Pete”) Nance, Edna (“Quinton”) Sparks, “Bud” (“Tootie”) Alexander, and “Darrell” Alexander. Bob was born in Buchanan, Tennessee on August 25, 1934, to Howard and Bessie Alexander. After Bessie’s death in 1942, the family left the farm and headed to the metro Detroit area. In his teens, Bob met the love of his life, Donna, who literally fell for him at the roller rink. They eloped on August 22, 1953, at the Chapel in the Garden in Angola, Indiana. Bob found love again, with the late Dianne Kukawski, after they were both widowed. Bob was an active Freemason for most of his adult life, preferring to serve behind the scenes as Steward. He enjoyed traveling to Las Vegas, among other destinations, and was a huge Detroit Tigers fan. As he putzed in his garage on Wexford Street, Ernie Harwell was always blasting from the transistor radio in the window. Bob owned his own business, Topps Exterminator, from which he retired in 2002. A memorial service is planned for 12 noon on Saturday, August 28, 2021, at Roseville Masonic Lodge, 27151 Gratiot Avenue, Roseville, MI 48066. In lieu of flowers, please consider a donation to the Michigan Masonic Charitable Foundation michiganmasons.org/foundation.

The family of Robert Alexander created this Life Tributes page to make it easy to share your memories.

Send flowers to the Alexander family.