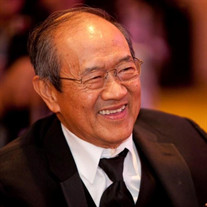 On February 24, 2022, Rolando DeLeon Bugarin was called home to the Lord. He passed away peacefully surrounded by his loved ones. On February 24, 2022, our beloved Rolando DeLeon Bugarin was called home to the Lord. After a near 10-year battle with Leukemia, Rolando passed away peacefully surrounded by his loved ones. Rolando, fondly referred to as Rolly, was born on June 18, 1941 to Ruperto and Soledad Bugarin in Nueva Ecija, Philippines. He was the youngest of 7 siblings, preceded in death by Oscar Bugarin, Nunilo Bugarin, Alberto Bugarin, and Soledad Joven. Survived by siblings, Angelina Rivera, and Estrella Urbi. Rolly attended Centro Escolar University in Manila, Philippines graduating in 1964 with a doctorate in Optometry. He met his beautiful wife, Marylyn, in Rochester, Minnesota and married in 1972. They relocated to Michigan and settled into the city of Troy, where they started and raised their family. Rolando worked in the field of Optometry at Co/Op Optical, retiring after 35 years in 2006. He took great pride in his work and was especially happy when he was able to assist his family and friends with any of their eyewear repair or needs. It is that same compassion for his loved ones that made Rolly always ready to lend a helping hand to his family, friends, and community. He was a very skilled and self-taught handyman who completed many large-scale home projects and repairs. In his later years, Rolly took up golf as a hobby and he enjoyed it tremendously. He worked hard at improving his technique and his efforts paid off. He was a multi championship trophy winner for his TGA league (2000/2009). When Rolly wasn’t practicing or playing golf, he enjoyed cooking, frequently showing love for his family through food.. Rolly and Marylyn would regularly host family dinners in which he highly encouraged commensality and heartfelt conversations. Rolly had many special dishes, from chicharron manuk to shanghai lumpia, peas and corn to pancit, bola bola to leche flan, the list was endless and Rolly was bombarded with many requests from his family and friends. However, if there is one dish that he will forever be remembered for, it is his famous (and most frequently requested) fried pork adobo which was praised as magical and unforgettable. It’s popularity was well known from coast to coast. No special dinner, gathering, or event was complete without it. A bowl of Rolly’s adobo was his special way of showing love and appreciation to others. While many cooks tend to keep their prized recipes under lock and key, Rolly was always willing to happily share his beloved recipes with anyone who inquired. Rolly is survived by his beloved wife of 49 years, Marylyn Enad Bugarin; Sons, Roland Derrick (Alana) and Richard Oliver (Michelle); and grandchildren: Katherine, Amara, Layla, Andrew, Olivia, and Benjamin. When you think upon our beloved husband, proud father, doting lolo, we hope that you will remember him for his kind heart, strength, wisdom, resourcefulness, and his devotion to God and his family. We are so grateful that Rolly was blessed with 80 years of an incredible life. He was so very loved and will be forever missed. * A livestream will be available for the duration of the viewing.* **We are respectfully requesting that masks are worn to attend both events.** ~Lovingly Submitted by the Family~

The family of Rolando Bugarin created this Life Tributes page to make it easy to share your memories.

Send flowers to the Bugarin family.