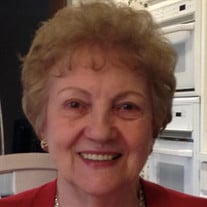 Romana Maria Klecun, age 93, of Warren, Michigan passed away peacefully February 1, 2021. Born in Poland on October 21, 1927. Beloved wife of Jerry Klecun. Loving mother of Isabella (Jeff Schaeper), Christina (Phil Smart), and Richard (Karen Klecun). Proud grandmother of Michael, Carolyn, Camille, Nicole, Lisa, Catherine and Lauren. Predeceased by her husband Jerry Klecun, and her brother Tadeusz Hildebrand. Viewing on Sunday, February 7, at 2 PM to 6 PM at E.J. Mandzuik & Son Funeral Directors, Sterling Heights, Michigan. Funeral mass at Our Lady of Czestochowa Catholic Church Sterling Heights, Michigan, Monday February 8 at 10:30 AM Instate, 11:00 AM Mass. Interment, Resurrection Cemetary Clinton Township, Michigan, following Mass. Born in Poland, her family was deported to Siberia during WWII. Allowed to leave Russia, they settled in Africa for the rest of the war. In 1948, the family re-settled in London where her brother introduced her to his friend Jerry Klecun. After engagement, they moved to America in 1951 where they married and had children. They bought a house on Grobbel in 1966 and she spent the next 52 years making the house a home. Romana cared for Jerry when he retired due to health reasons. He passed away in 1985 and later met her friend and companion Walter and they enjoyed the retiree life. He passed away in 2018. Romana loved to entertain and with her best friend Jane they had many parties and gatherings with friendship and laughter. Romana will be remembered as a great mother, grandmother and friend. All who knew her will miss and cherish memories of her.

The family of Romana Maria Klecun created this Life Tributes page to make it easy to share your memories.

Send flowers to the Klecun family.