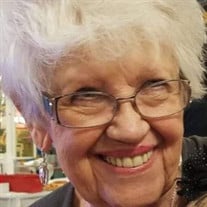 Sally Jean Phillips was an amazing person and left this world knowing her Lord and Savior. She passed away on November 6, 2021 while surrounded by her family. Sally was born in Detroit, Michigan and grew up in Dearborn where she graduated from Fordson High School. After graduating, she worked in Detroit at the Penobscot Building and Cadillac Tower. During her younger years, Sally spent her summers with her grandmother in Alpena, Michigan. She adored her grandmother and loved being by her side as much as she could. Sally would share stories of watching her build log cabins and teaching her how to fish the lakes in the Alpena area. Sally met and married Joseph Phillips in Clawson, Michigan. They had five children, Kirk, Renea, Russell, Joe, and Scott. They moved to Warren, Michigan where Sally lived for over 60 years in the same home. A home that seemed to bust at the seams with laughter, love, and unforgettable memories. Sally and her late husband Joe had an incredible connection with many neighbors on their street. Even as time had passed, and some people moved away, those relationships never faded. She welcomed new neighbors and brought them into the family as well. This would be a constant theme for Sally, making people feel welcomed and loved. Sally spent 25 years at St. John Macomb hospital where she would eventually retire. There she made lifelong friends who became a second family to her. Sally was a proud member of The Woods Church in Warren, Michigan. She spent countless hours cooking for events, cleaning the pews, and serving the homeless. She was passionate about spending time with the members of the church where she not only grew in her faith but made amazing friends along the way that she loved dearly. If you asked those closest to her, they would tell you stories of her sending them a card to cheer them up or dropping off a meal when they needed it most. She genuinely enjoyed her bible study group and the many luncheons they attended. One of Sally’s most enjoyable hobbies was fishing. She spent many hours over the years teaching her children and grandchildren how to fish. She loved being on the lake and spending her weekends with her family. Sally was incredibly proud of her children and grandchildren. She never missed a game, concert, or recital. They were the epicenter of her life. Also, she loved to vacuum…yes, vacuum. Sally also enjoyed spending time in her garden where she loved her flowers and her vegetables. Sally was survived by her sons Russell (Helen), Joe (Misty), and Scott (Jill), Grandchildren: Dexter, Kally, Emily, Alex, Addy, Lexie, Avery, Bryn, and Reese, and her great Grandchildren; Dominic (Niko) and Viviana. Sally is predeceased by her husband Joseph, daughter Renea, and son Kirk. Sally’s final resting place will be at White Chapel Cemetery where she will join her late husband, Joe. In true Sally fashion, she did not want the focus to be on her and requested to not have a viewing or funeral. She wanted a memorial luncheon to bring those together that she truly loved. The date, time, and location of this memorial will be announced in the coming weeks.

Sally Jean Phillips was an amazing person and left this world knowing her Lord and Savior. She passed away on November 6, 2021 while surrounded by her family. Sally was born in Detroit, Michigan and grew up in Dearborn where she graduated from... View Obituary & Service Information

The family of Sally Jean Phillips created this Life Tributes page to make it easy to share your memories.

Sally Jean Phillips was an amazing person and left this world...

Send flowers to the Phillips family.