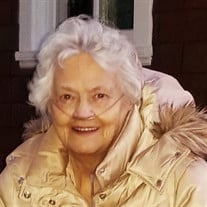 Viva Ellen Bomber, age 84, passed away on December 15, 2019 at Troy Beaumont Hospital. She was born June 16, 1935 in Pellston Michigan on her family farm to the late George and Susan Stark. Growing up, Viva was surrounded on the family farm with her 12 brothers and sisters. She spent her days working diligently the farm until her nephew, Walt Spencley, arranged a blind date with Eugene Bomber. Viva was just 16 years old when she fell in love with Eugene. They wed on October 13th 1952. Viva and Eugene had a long and beautiful marriage. They were parted by Eugene's Death on November 6, 2015 after 63 years of marriage. They were true soul mates and were often referred to as the most loving and caring people that anyone knew. She was known amongst many family members, friends and neighbors as “Aunt Vi”. As a dedicated house wife and mother; her home was filled with love and she welcomed everyone. Viva was also known for being a great cook and an amazing host. It was a certainty that whoever came for a visit would leave overfilled with food and with love. If there were only four people planned for dinner; Viva would be prepared to feed the ten additional people who might stop in. “Aunt Vi” made sure there was never a shortage of food, love, hugs, kisses, and smiles. She went out of her way to make anyone feel like family. Viva's wonderful laugh and captivating smile brought warmth and love to countless people. Children fell in love with Viva’s fun and playful personality. She loved flowers and birds, especially cardinals due in part to red being her favorite color. Many happy memories were made going up north in Michigan and traveling with her family. She was an avid reader and loved waterfalls. Viva was preceded in death by her loving husband Eugene, her parents George and Susan Stark; her brothers and sisters, Arlene Stark-Bosma and (John Bosma), Wava Stark-Gunderson and (Russ Gunderson), Harriet Stark-Readmond and (Keith Readmond), Ward Stark and (Alice Stark), Marge Stark-Sunkle and (Harold Sunkle), Darcy Stark and (Grace Stark), Don Stark and (Joesphine Stark), Al Stark and (June Stark), Harry Stark and (Dorthy Stark), Ron Stark and (Hazel Stark), Lavina Stark-Spencley and (Lawrence Spencley), and baby brother Jacob Stark. Viva is survived by her son Eugene and his wife Lauren, their two children Eugene and his wife Holly, Nicholas and his wife Angela, and four great grandchildren Mason, Elliana, Johnathan, and Angalie. She is also survived by numerous nieces, nephews and cousins. She will be greatly missed.

Viva Ellen Bomber, age 84, passed away on December 15, 2019 at Troy Beaumont Hospital. She was born June 16, 1935 in Pellston Michigan on her family farm to the late George and Susan Stark. Growing up, Viva was surrounded on the family farm... View Obituary & Service Information

The family of Viva Ellen Bomber created this Life Tributes page to make it easy to share your memories.

Send flowers to the Bomber family.