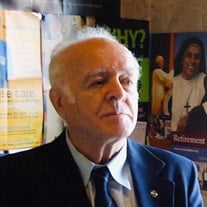 A solemn patriarch and patriot, Zenon Stępień, age 96, left this world for the next on January 16, 2022. Born to proud parents Paweł and Klementyna Stępień on January 14, 1926, in Warsaw, Poland, he immigrated to the United States in September 1968 aboard the Stefan Batory. After the loss of his loving wife Barbara in 1969, Zenon raised their two daughters while working at Chrysler as an electrician; he retired in 1989 after 20 years of labor. He spent the following decades enjoying quality time with his family, reading, reciting poems (he was quite the zealous bard!), and staying active in the Polish community and church. He was a devout Catholic; his favorite saints were St. John Paul II, St. Maximilian Kolbe, St. Faustina, Blessed Jerzy Popiełuszko, and Blessed Solanus Casey. Zenon now joins his late wife Barbara in eternal rest. He is survived by his daughters Anna (Bruce) Wojciechowski and Teresa Stępień; cherished grandchildren Marla Wojciechowski (religious name: Sr. Maryja Czarna Madonna, SSVM), Lea (Joshua) Wojciechowski Ross, Eliza Stępień, and Zenon Stępień; and adored great-grandchildren Xavier and Simon. Zenon is preceded in death by his brother Jerzy (Elżbieta) Stępień and sister Zofia (Edward) Karpińska. He is also survived by his nephews Jerzy (Małgorzata) Karpiński and Krzysztof Karpiński. Zenon was a proud World War II Veteran and the President of The Polish Home Army of Metropolitan Detroit. He was the former Vice President of The Polish People’s Home Association in Windsor, as well as a supporter of the Polish scouting organization at Białowierza. Zenon was an avid gardener and enjoyed being physically active. He published and curated the “Biuletyn Informacyjny AK” for over 30 years. Zenon’s kind and loving spirit will be forever missed. He had a steady presence and constantly looked for opportunities to be generous and helpful to all. Read more about Zenon in “A Story about a Polish Immigrant,” written by his granddaughter Lea in April 2017: www.polishweekly.com/2017/04/a-story-about-a-polish-immigrant In lieu of flowers, donations may be made in Zenon’s memory to Queen of Apostles SOUP KITCHEN, 3851 Prescott St., Hamtramck, MI 48212.

The family of Zenon Ignacy Stepien created this Life Tributes page to make it easy to share your memories.

A solemn patriarch and patriot, Zenon Stępień, age 96, left this...

Customized sympathy cards. Mailed for you.