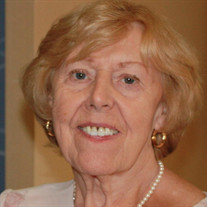 Our beloved Patricia was born April 9, 1935 in Manchester, England to Thomas and Eileen Helicon. Living in England at this time, Patricia’s early childhood was turned upside down as the result of the trials of World War II. Her father was a patriot who entered into service and served overseas, and her mother and Patricia relocated to the safety of family in Blackpool, England. Patricia’s grandmother, whom they lived with, played a significant role in Pat’s life and upbringing whilst her mother worked outside the home. Patricia also established loving relationships with her aunts (aunties) who played into a major pivotal event in Pat’s life. Two of Patricia’s “aunties”, auntie Kay and auntie Jenny, married U.S. Soldiers and became war brides moving to the United States after the war ended. By 1951, Patricia had graduated from secondary school and procured a position as a secretary at National Utilities, a Manchester lending institution. Over the next 3 years Pat saved her money to fund a one-way ticket to the US for adventure and to visit her dear aunties. At the age of 19, Patricia boarded a ship all on her own for the seven-day voyage that, unknowingly at the time, would become her new home. While aboard the ship Patricia befriended other passengers, one of whom advised her on how to arrange train travel from New York to Detroit. After many hours, Patricia arrived in Detroit at midnight and was met by her auntie Kay and her husband, uncle Ray, at the historic Detroit Train Station. They took Pat in to live with them and their 3 children in their small Clawson home. Once Pat was settled, she quickly secured a position as a secretary at an HVAC company and began enjoying her new life in the US. Auntie Kay and family were members of Guardian Angel Catholic Church located in Clawson, and she encouraged Patricia to join the Catholic Youth Organization (CYO) where she eventually met her future husband Frank Valko. Frank was the president of the CYO and having discovered that Pat had no driver’s license nor had ever driven a car before, offered her a ride to her home. That ride began their relationship and eventually Frank and Pat were engaged and they married on August 18, 1956. Following their wedding, the newlyweds bought their first home on Alexander Avenue in Royal Oak. Precisely nine months following the wedding their first child, Paul, was born May 15, 1957, and soon to be followed by three additional children. As their family grew, they realized they needed more room, so in 1965 they built a new home on Hedge Drive in Sterling Heights and established lifelong relationships with some truly exceptional neighbors. Although not everyone lived on the same street, this group of neighbors were lovingly nicknamed "The Hedge Drive Gang". The neighbors were very close sharing each other’s company at block parties, pig roasts, Bunco night and Tripoley card parties, bowling leagues, and so much more. Patricia and Frank built a special bond with two neighborhood couples - Barbara and Randy Scott, and Ivete and Dago Krambek. The ladies were extremely close and they referred to themselves as “the three musketeers". The three couples enjoyed family vacations together, as well as couples’ trips, numerous social events, dinners, and traveled to the Miss USA pageant in Florida where one of the daughters competed. Patricia loved her family first and foremost. She also loved gardening, flowers, dinners with family, traveling and sight seeing, attending shows with both family and friends, and of course a good cup of tea. Pat loved pets as well as all animals and had a special love of cardinals. She loved her many pet cats and dogs over the years, and especially her dog, Charlie, who was with her to the end. Patricia and Frank were active members of St. Anne's Catholic Church for many years. They were also affiliated with St. Anastasia through family connections, including Frank’s mother, Marie, who was a founding member, son Bryan and wife Laurie were married at St. Anastasia and active parishioners, and where all of their grandchildren were baptized. Patricia was the loving wife of the late Frank for 60 years. Beloved mother of the late Paul (Debbie), Bryan (Laurie), Keith (Donna), and Lisa (Michael) Hackert. Dear grandmother of Thomas, Daniel, Katie (Josh), Colleen, Jennifer, Jacob, Sarah, Derek and Alana. Great grandmother of Nora. Patricia was loved dearly and will be greatly missed by family, friends and neighbors. In lieu of flowers the family requests donations be made to the Humane Society of Michigan. (https://www.michiganhumane.org/)

Our beloved Patricia was born April 9, 1935 in Manchester, England to Thomas and Eileen Helicon. Living in England at this time, Patricia&#8217;s early childhood was turned upside down as the result of the trials of World War II. Her father... View Obituary & Service Information

The family of Patricia Valko created this Life Tributes page to make it easy to share your memories.

Our beloved Patricia was born April 9, 1935 in Manchester, England...

Send flowers to the Valko family.